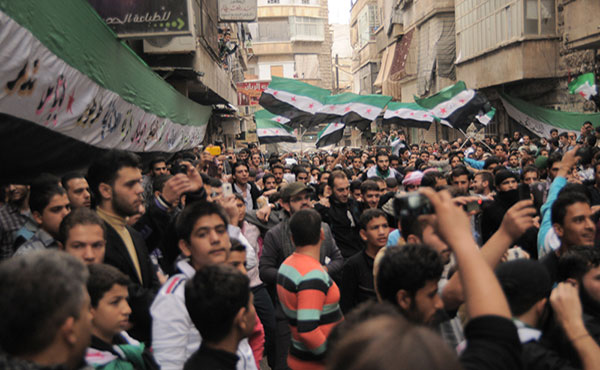 Call to support the revolution in Syria

Following up the activities in support of the Syrian revolution at the World Social Forum (WSF), in March 2013, forces and leftist parties in the WSF 2015 considered it necessary to ratify and strengthen their support to this Revolution; and pledge to do everything possible to organise a meeting in Istanbul in July this year, bringing together all forces and leftist parties, social organisations, trade unions and solidarity movements supporting the Syrian revolution, and who are willing to defend the Syrian people in their struggle for the revolution their right to overthrow the blood thirsty regime of al-Assad.

What has been happening since March 2011 in Syria is a real revolution, which still stands today, despite all the violence and the atrocities of the Syrian regime against the raised people. And despite the confluence of actions of regional and international powers–whatever they may say- to eliminate the popular mobilisation by various means, because they fear the success of the revolution and its extension and they are against the revolution.

All these regional and international forces are hostile to the Syrian Revolution. As the Saudi monarchy and the Gulf countries, which do everything they can to degenerate the revolution into a reactionary, sectarian conflict and civil war, by supporting the fundamentalists, the sending of “jihadists” and financing the Islamisation of revolution. It is the case of Turkey, which, after having enjoyed considerable economic benefits from the regime of Bashar al-Assad sought to strengthen its regional influence as the dominant power through the introduction of a system in which the “Muslim Brotherhood” was the main pillar, and suddenly facilitated access of the “jihadists” and favoured their installation in Syria. Or Russia and Iran that support the criminal and murderous regime of al-Assad to the point where the military forces provided by Iran are essential to prevent the fall of the Syrian regime and to determine its fate.

Syria has been overwhelmed by fundamentalist forces that fought the people trying to impose their equally heinous and murderous power. These forces allow the continuity of the Syrian powers. They are Daesh or “Army of Islam” or “Al Nusra Front”, they all represent a reactionary action financed and supported by regional and international forces, as already mentioned, and they now control large parts of Syria, and try to impose their retrograde power, atrocious and extremely violent. Moreover, these forces arrest and maim activists and leaders of armed resistance groups.

The Syrian Revolution faces all imperialist forces, which are trying systematically to destroy it, when different sectors claiming to be of the left support the regime and condemn the revolution considering it as a “conspiracy”, while forgetting that the main goal is to scare the people and dissuade them from pursuing the rebellion, when the world is going through a crisis that threatens to spread the revolutions beyond the Arab world.

The Syrian people struggles to get rid of the regime to open a new situation where it can survive, but it is faced with various forces in their uprising against the arrogant system; either the “jihadists” or imperialist forces operating under the pretext of facing Daesh (when in fact it is to influence the evolution of the fight) or regional powers seeking to halt the spread of the revolution started Tunisia, which spread to several countries.

This brings us to gather and confirm our support to organise our activities to contribute to the clarification of the reality of the revolution, make it more effective and add all our efforts to support its success.

We are certainly against the Syrian regime, but we are also against fundamentalist forces as “Army of Islam” and “Al-Nusra Front” and especially Daesh. We are also against all the forces involved to abort the revolution and contribute to the destruction and dismantling of Syria (the Saudis, Qatar, Turkey, Iran, Russia…) and against imperialist intervention under the pretext of war against Daesh to secure and strengthen their role and interests in the region. We are against all imperialist forces and against all countries that face the revolutions and contribute to their destruction.

Despite all difficulties, the Syrian Revolution goes on. Syrian people is mobilizing for more than 4 years to claim dignity, work, bread and freedom and still defends its demands against Assad regime and radical islamist groups supported by regional countries and the imperialism.

We are against opposition parties that hurt the revolution and that have linked their policies to regional forces and imperialist countries. We call left groups and unions to support the Syrian masses mobilized to build a free, laic, and democratic Syria.

For all this, we call for an international meeting to support the Syrian revolution, on the 11 and 12 July, 2015, in Istanbul, Turkey.