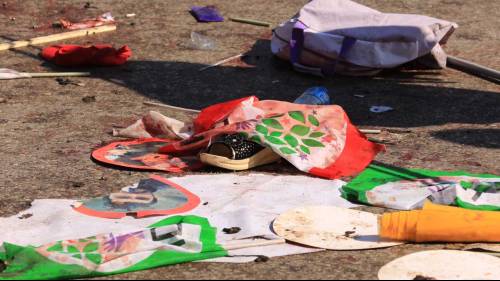 Diyarbakır, Suruç, Ankara… The massacres continue under the government surveillance!

The bomb blasts at the Ankara train station building minutes before the peace rally which was organized by unions DISK-KESK-TMMOB-TTB*, have killed at least 86 people and injured 186, according to officials.

We are facing a despicable attack of which the perpetrators have not yet been explained or claimed. However, the government is responsible for this massacre as well as it is politically responsible for Diyarbakır and Suruc massacres. The Palace and its government which couldn’t swallow the results of June 7 elections asking for a re-election and are ready to take any shady act to maintain their power, were unable to “prevent” this attack in the heart of Ankara likewise and ironically they never managed to “enlighten” the massacres in Diyarbakır and Suruc.

This deadly attack is the continuation of the ongoing violence in Kurdish provinces through procedures like curfew and state of emergency, and of pressurizing the oppenents and media. The government just very similar to its declerations in Reyhanlı and Suruc, still ignores that there had been an immense security flaw through its Minister of the Interior Affairs, Selami Altınok. How can they deny the security gap in this biggest massacre throughout the political history of Turkey happened in the middle of the capital? How can the government be uninformed of the bomb in the heart of Ankara under these circumstances while claiming that “nothing can happen in the Middle East without their information”? Above all, we call the Minister of Interior Affairs, the Secretary of National Intelligence Organization (MIT), Director General of Public Security and Governor of Ankara to resign! Either the statements regarding security and intelligence power are lies, or the present power is used to benefit from such actions. With its attitude to this attack, the government signals that it will go to any lenghts in order to intimidate labour, democracy and peace advocates, and to terrorize the people.

But it is obvious that AKP government, having failed to succeed in bloody and dirty plans before, won’t be able to reach their purpose and intimidate the workers, the oppressed and labourer people. We are calling the masses to condemn this deadly attack and show to mobilize against the bloody plans of AKP government!