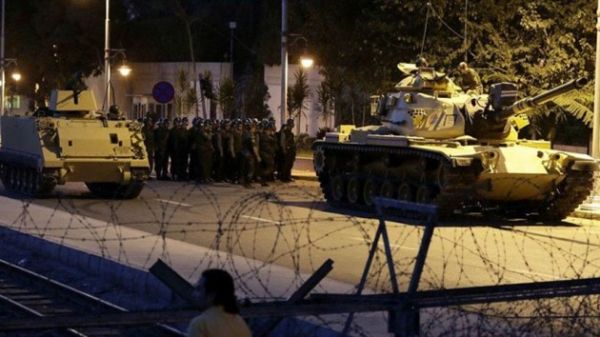 Turkey: Time to protect our freedom against the coup and against the repressive of Erdogan!

We have witnessed a military coup attempt that had started gaining visibility late last night. Following the military junta’s seize of certain critical locations such as the Office of the Chief of the Army and that of the General Command of the Gendarmerie, a failed coup attempt took place before the eyes of Turkey. While more than 60 people died during the conflicts that followed, about 1400 members of the Turkish Armed Forces got detained. The Turkish National Assembly was bombed for the first time in Turkish history. While the conflicts still continue in certain locations, the failure of the attempt has already been practically proven.

As Workers’ Democracy party, we are in strict opposition to a military coup. If the coup that was supposedly initiated in name of “reinstituting democracy, human rights and the supremacy of the law” were to succeed, that would have meant the complete erasure of all democratic rights and freedoms that have already been largely cut short by the palace regime. It should never be forgotten that the military is a fundamental leg of the ongoing repressive regime.

At the same time, this attempted military coup signals a new culmination for the deepening crisis of the regime in Turkey. The tangible ground of this coup attempt has been built on top the repressive policies carried out by the palace regime. The fact that Erdogan was the target of this coup cannot conceal his responsibility in bringing the country to the brink of a collapse. Being against military coup under no circumstance means to support Erdogan’s repressive regime.

In the aftermath of this failed military coup attempt, there is a widespread concern among large sectors of the society that this unsuccessful attempt will be used as means to justify increased repression of the palace regime. The only real solution against the military juntas as well as against the repression of the palace regime is the mobilization of the masses of workers, youth, women, Kurds and all other repressed and exploited sectors against repressive and looter policies as well as these masses’ persistent efforts to claim democratic rights and freedoms.