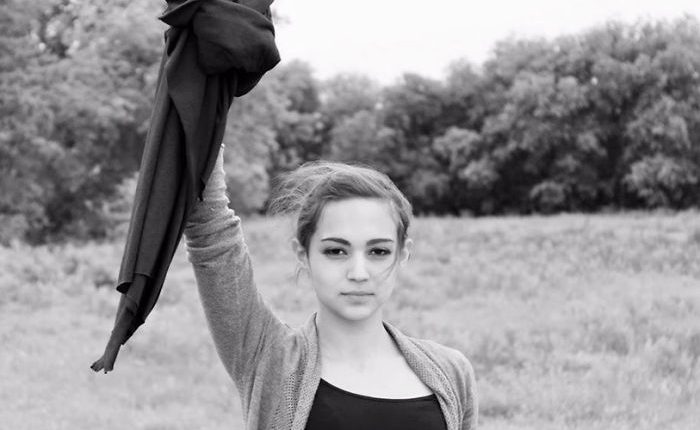 “My Stealthy Freedom”: An interview on Women’s Movement in Iran

A social media campaign has been ongoing in Iran for a while against compulsory hijab law. To protest, Iranian women share their photos wearing white headscarves or symbols by using the hashtag #whitewednesdays. The idea stems from Masih Alinejad who started the online movement My Stealthy Freedom against this law. In the last 3 years, more than 3,000 women posted photos and videos without headscarves via this campaign. As women in Turkey who reject all kinds of oppressions towards our bodies and life styles through campaigns such as “Don’t Meddle with My Clothes”, we support the campaign run by our Iranian sisters. Here is our talk with Saba, our Iranian activist friend, on this campaign and women’s movement in Iran.

Women Solidarity: Europe and the USA look at Iran from an orientalist point of view. Even though Turkey is also considered from that perspective, the same point of view on Iran exists here. However, recent movements such as My Stealthy Freedom and One Million Signatures which we can follow via both Turkish press and foreign press show that the situation in Iran is much different than the perceived one. How do you evaluate women’s movement in Iran?

Saba: First of all, I would like to thank you for giving me this opportunity to share my thoughts with you. Unfortunately, after the 1979 revolution, the image about Iran, Iranian people and specifically Iranian women became darker every day. Media has contributed to shape that imagination for people around the world, especially in the western countries. The Iranian government had its role too by banning many news and interviews with Iranian people on certain topics that show the reality about Iranian people and their life styles on TV or newspapers. Although Iranian women had significant role in society before the Islamic Revolution, throughout the years after the revolution the number of Iranian women entering universities became more significant compared to men, reaching more than 60% of entrees each year. Despite the general idea of the west that imagines an Iranian woman as uneducated passive part of the society who stays at home and takes care of their husband and children, Iranian women had prominent roles in social and political movements in Iranian history not only before the revolution but also after that. Iranian women were the oppressed gender in Iranian society after the Islamic Revolution, therefore they made a great effort to fight that oppression by educating themselves and challenging the Iranian government with vast knowledge about societal and political problems targeting women. Throughout all these years after the revolution, a very high number of Iranian women were unhappy about the obligatory law of hijab because forcing the hijab was the first sign of oppression on women to limit them and show them as inferior in our society. But unfortunately, Iranian women did not have a platform to express themselves on a topic such as obligatory hijab and let their voices be heard on national or foreign media. It was only until 2014 that the campaign of My Stealthy Freedom was born as the first free platform for Iranian women who believe in or not believe in hijab to express their ideas about the obligation of hijab in Iran. Iranian women who did not believe in wearing hijab never had representatives inside governmental media. In fact, until today any woman who wants to work for the government including national media should agree to follow the dress code introduced for women. My Stealthy Freedom campaign played a very important role in giving that censored part of Iranian women community who did not believe in wearing hijab and were never shown on national or foreign media a voice to express themselves. The story of Masih Alinejad, who started the campaign, inspired many women who had stayed quiet for more than 30 years and now we can see that they are Iranian women themselves who are taking this campaign day by day forward with stronger motivation through sending pictures, videos, and inviting their men in their families or friends to join them to show the real face of Iran and Iranians’ life styles and preferences to the world, for the first time after 38 years.

WS: Women who want to wear hijab also join White Wednesday, the last campaign of My Stealthy Freedom, with their white symbols. Because they advocate that hijab must be preferential, not compulsory. Actually, My Stealthy Freedom is very important for women’s struggle worldwide. I believe that it is meaningful for Turkey in particular. Can you inform us about the movement?

Saba: I believe the White Wednesdays movement is a very clever movement by “My Stealthy Freedom” campaign. To clarify, Iranian women have always pushed boundaries to take off their scarves in areas where nobody was passing, there was no police, or inside their private cars in public. But as an Iranian woman, I also sensed that how we as women were sort of annoyed by the fact that we might become criticized in public if our scarves fell off. Therefore, women are usually concerned that their scarves don’t fall off so that they won’t have to give any excuse to a more conservative passerby or police that would disturb them in public. White Wednesdays gave this opportunity to women to express themselves and object the obligatory hijab in the context of the Iranian hijab law. In this case, an Iranian woman who wears a white scarf, still shows that she is somewhat respecting the obligatory law of hijab but with the symbolic white color that signifies her objection. Now by wearing a white symbol, Iranian women and men are showing that they want to challenge the Iranian discriminatory laws within their own context without actually breaking any law, appearing in society and showing that they are a big number of people who object these laws, and they bring the online movements to the streets of Iran every Wednesday. Such movements like White Wednesdays can unify people in public, empower those who have the same ideas about the Iranian discriminatory laws, specifically the law of obligatory hijab. I believe the most important element for people in our society is to once and for all put their fear away and become involved in every political and societal movement so that we can reach a fundamental change in our societal and political system. I myself became involved, active and joined My Stealthy Freedom campaign because of my personal memories in Iran with morality police. I got arrested in 2006 by the morality police in Iran and was treated by the police very badly, being hit by the police only because I was wearing a more colorful outfit that day and walking with my ex-boyfriend on Valyasr Street in Tehran. I was so much traumatized by that incident and how I was also treated in the police station that for many years I was searching for a way to express my anger about the way I was treated as an Iranian woman. My Stealthy Freedom campaign gave me a voice to express myself too. Therefore, I decided to support and make the campaign more known.

WS: We saw that women were quite active in the last election in Iran. What were the demands of women during this process? What will be the impact of election results?

Saba: Despite the general view of the world that considers Iranian women as passive and suppressed, women have always had great impact in social and political situations in Iran’s history. Women didn’t only have great role in the recent elections in Iran. You can find significant role of women in Iranian political situation before the 1979 revolution. Iranian women in the past 38 years of revolution are even much more educated that make them more active since they have the knowledge and they are realizing their human rights more. Iranian women have been the suppressed gender in Iranian society in many ways. Therefore, they decided to educate themselves and stand up for their rights. You can also see a great decrease in the number of women getting married, having children and following the traditional life style of what was expected of a woman in Iranian society.  There are also more women getting into socially introduced “male jobs”. All these mentioned acts by women show that women are significantly changing the social and political situation in Iran. With participating in recent elections, women are only trying to push boundaries and open more closed doors for themselves and decrease the gender gaps and discriminations.

WS: We see that women’s movements have gained momentum in the world. For instance, feminist movement is growing against Trump’s policies and gendered discourse. Last year, women in Iceland went on strike to protest gender pay gap. Ni Una Menos movement in Argentina protests against femicides and violence against women. These are among prominent issues also in Turkey. Does women’s movement in Iran show parallelism with these?

Saba: Of course, I believe there is a parallelism in such women movements around the world. I believe women are finally waking up. It is important to mention this point here: there are many countries in the world in which women are shown as being free and equal with men and have somewhat same rights which is absolutely not true. We can easily see the suppression of women in many modern societies that claim to be modern such as the USA or many European countries. In fact, in Iran the suppression of women is obvious but it is more dangerous in other countries that tend to hide and mislead the mindset of people to make them believe they have “freedom” and their “human rights” are respected. All these movements in the USA, Iceland, Argentina, Turkey and Iran show that women are coming to a new realization of their rights that have been taken away for a very long time. For Iranian women, changing the law of obligatory hijab is a huge step to open the door for more changes regarding women rights in Iran that hopefully will lead to equal pay and more importantly equal respect in society.

WS: What can your sisters in Turkey do for women’s struggle in Iran? In Turkey, we are also having hard times and we need solidarity. How can we communize our struggles?

Saba: I believe mostly regarding the issue of hijab, I would like women in Turkey to hear Iranian women’s voice that their demand regarding hijab is not that they find freedom only in removing a piece of cloth from their heads. I hope our sisters in Turkey show their solidarity by joining our online campaigns. Fortunately, the door has now become more open for tourists in Iran that is a very good sign and opportunity for people around the world to see the real face of our country and each woman who travels to Iran can also show their support through joining our movements such White Wednesdays. The more united we are, the more fearful the discriminatory regimes and governments will be.