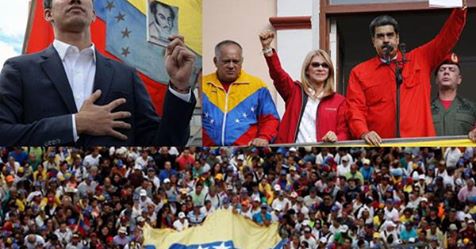 Oust Maduro with the autonomous mobilisation of the workers! Neither Trump nor the military. Neither Guaido not the bosses parties of the National Assembly. No to the imperialist interference of the US, The EU and the Lima Group.

The situation is untenable. The political and social crisis is grievous. The hunger, lack of medicines and repression is unbearable. The workers and the people want Maduro and the civil-military regime to go. That is the reason why protests and popular fight grow.

Last 23 January, a gigantic demonstration took place in Caracas, with the affluence of workers and dwellers of popular sectors. This massive demonstration replicated in every main city of the country, where millions of the Venezuelan people expressed their rejection of Nicolas Maduro’s regime of starvation.

In the previous days to the 23 and that same day, thousands of people from the popular neighbourhoods of Caracas and in other cities of the country, took to the streets and set up barricades to block the them against the government.

Bosses’ parties grouped in the National Assembly (AN), called this demonstration to favour Trump’s military intervention. The AN and its president Juan Guaido, subordinated to imperialism and backed by the bosses’ governments of the Lima Group, tried to divide the Armed Forces with the aim of promoting a coup.

The Amnesty Law for civilians and the military, seek to provide a warrant, a kind of safe conduct to the human rights abusers, repressors and corrupts in the government, provided that they leave Maduro. Our party strongly reject this Amnesty Law that only helps the military and the “boli-bourgeois” (those who got rich under Chavez and Maduro, at the expense of the hunger of the people).

The coup attempt of the AN parties is part of the blatant intervention plans of the American imperialism, together with the ultra-reactionary governments of the region, as Bolsonaro in Brazil, Macri in Argentina and Duque in Colombia. They impose austerity programmes and they are repudiated by their people.

Socialism and Freedom Party (PSL) considers the protests of these last days show that the people had too much with this government that starves us. The Venezuelan people said Enough! Maduro must go, but with the mobilisation of the workers, the youth and the people. Neither Trump nor the military. Neither Guaido nor the bosses’ parties in the AN can interfere in the Venezuelan people’s decision to end with Maduro’s government of fake socialism.

Our party, as it strongly repudiates the interference of the ultra-conservative government of Donald Trump’s, it also rejects the interference of Russia, China and Turkey, among others, that politically support Maduro, while they perform all kind of juicy businesses at the expense of our resources.

The popular communities need to deepen their protest taking to the streets throughout the country. We have to follow the examples of the young people in Catia, Cotiza, San Martin, Petare, El Valle and other popular areas of the country, who took to the streets against Maduro’s government on 21 and 23 January. They were tired of being hungry, without medicines or transport. They were fed up of not having gas, water, power energy and other utilities.

We fight for complete freedom for all those in jail for demonstrating or dissenting, were they workers, union, political or popular communities’ leaders. We stand for the full validity of the democratic liberties. According to human rights agencies, 791 are in jail, and thousands under the precautionary measure. As a result of last days repression, 27 people are dead. We stand for the defence of the right to go on strike. We are against the criminalisation of protest, the layoffs at State companies and the threats to all that demonstrate.

We say the solution to this dreadful economic and social crisis will not come from the military, Trump or the AN parties. They are the ones who betrayed the popular rebellion in 2017. We say the workers and the people through their genuine organisations are the ones who must be in power and carry out a Popular Economic Plan with salaries equal the market basket; an emergency plan to import medicines and food; confiscation of assets from the corrupt politicians  and fraudulent importers; 100 percent oil industry, without joint ventures or transnational enterprises; no to the payment of the external debt, and all that money for salaries, pensions, housing, health care, education, to renationalise PDVSA and the joint ventures and a land reform.