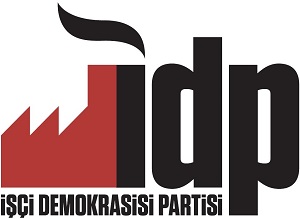 At its party assembly meeting on 27 January 2019, Workers’ Democracy Party (IDP) discussed its political stance regarding local elections to be held on 31 March 2019 and its course of activities during the election process. Accordingly:

1) Joining the elections as Public Alliance, AKP (Justice and Development Party) and MHP (Nationalist Movement Party) want to decisively win these local elections, and their aim with this victory will be extending their Islamist-fascistic policies – which are already being implemented on government level – to the level of municipalities; turn the municipalities into companies and citizens into customers within the framework of neoliberal policies; maintain profit and plunder system of pro-government rent-seeking lobbies within and around the municipalities; make their reactionary ideologies sovereign on the society; and most importantly, legitimize the One Man regime which is ruled from the Palace. Therefore, they serve the elections as a “matter of perpetuity”. In this sense, March 31 election is a matter of perpetuity not for the country but for themselves. For Public Alliance, every municipality that they will lose in the elections will mean disruption of the stronghold of One Man regime, losing a place to plunder and a slap from working people. Workers’ Democracy Party invites all workers and laborer people to send this reactionary alliance away from municipalities.

2) The local administration understanding of Workers’ Democracy Party is a municipal work that is based on benefits and demands of worker and laborers; adopts democratic demands of Kurdish people and all oppressed sections; looks after the equality of women and men and positive discrimination of women; and focuses on the protection of environment. A call for such local administration might pave the way for the adoption of our demands such as laborers’ control of municipalities, housing for everyone, equal representation of women and right to speak and decide in municipalities, free education and healthcare for everyone, safe and non-profit public transportation, fight against ecological destruction, sufficient wages, insurance and right to unionize for all municipal employees and all workers. Such local administration has to be grounded on local assemblies where workers and laborers can organize. For that reason, Workers’ Democracy Party believes that workers and laborers should create an alternative to reactionary Public Alliance by participating in elections with their own programs.

3) CHP (Republican People’s Party) and İyi Party (Good Party), components of Nation Alliance, are two boss parties which are extremely distant from the understanding of such local administration. In spite of its populist and democratic discourse, CHP is drawn into One Man regime, accepts the legitimacy of this regime in a sense, approaches and even has clung to İyi Party – which has a fascistic history – by distancing itself from worker-laborer demands and leaning to the right wing. The whole purpose of CHP is to pull votes from “conservative and right-wing” sections, as defined by CHP, in order to come to power in municipalities. However, these sections include millions of laborers who have been condemned to poverty and hunger as a result of economic and social policies of the regime. While these sections are trying to distance themselves from AKP, CHP is hindering this detachment by playing to their religious and conservative sensitivities and confines them to the right wing. In this respect, Workers’ Democracy Party calls workers and laborers not to vote such parties but to get involved in the elections by developing their own worker-laborer programs.

4) We believe that supporting HDP (People’s Democratic Party), which is embraced by the majority of the community in the region, and Kurdistan Election Alliance parties around HDP during a time that the One Man regime maintains its oppressions in Kurdish cities and keeps mayors, officials, politicians, intellectuals and democracy activists of these cities in prison would mean supporting the Kurdish people’s struggle for the right to self-determination under the circumstances in which there is no new worker-laborer alternative in the region. However, we are aware that HDP’s understanding of municipal work so far includes examples which do not fall within the understanding of social and populist municipalities, and local participation and control have not been ensured effectively. Therefore, Workers’ Democracy Party calls to vote for HDP in Kurdish cities by criticizing its understanding of municipal work.

5) On the other hand, although HDP initially explained that it would not run in the elections in the West, the party is now showing candidates in the Western cities which means supporting Nation Alliance indirectly to prevent “conservative” Kurdish votes to go for AKP. Therefore, supporting HDP in the West means supporting Nation Alliance and it is unacceptable for us. However, local election has its own dynamics. If these dynamics have exceptional attributes that will enable local HDP nomination to pave the way for workers and laborers and expand the scope of a united left opposition, then candidates of HDP might be supported in some regions depending on the region, activities and candidate under such circumstances.

6) In light of these approaches, main electoral policy of Workers’ Democracy Party is to develop an option for the working class in order to get ready for the expected economic, political and social attacks by the government and bosses after March 31. We believe in absolute obligation of offering masses a municipality program which is not profit-seeking but needs-driven and which does not side with the capital but with the workers. For that purpose, Workers’ Democracy Party will share its Local Administration Program of Workers-Laborers which was prepared in line with the demands and needs of working people, with all workers soon. And accordingly, we aim and try to collaborate with other parties and movements to nominate candidates who are workers and laborers, everywhere we can. In cases where we cannot do this, we will try to nominate our own independent working candidates. And in other places where this is not possible, we will not abstain from at least giving critical support to other working and socialists candidates.