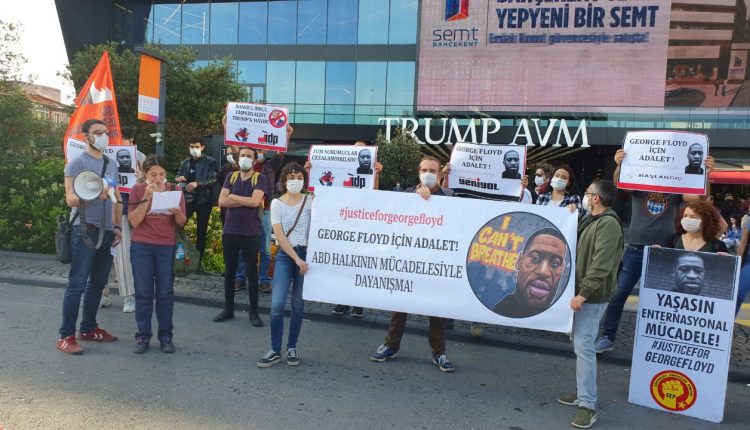 Justice for George Floyd! Solidarity with the struggle of the people of the US!

The brutal murder of George Floyd by the police in the city of Minneapolis on May 25 led to an unprecedented mass protest wave in the US. The protests, which began with demanding punishment for those who were responsible, took upon a militant and angry character that spread to all states in face of the harsh intervention of the law enforcement officers and as a result of the US government’s attitude that protected the police who were involved. These protests are comparable to the massive wave of rebellion of the 1960s in terms of their size and the determination of people filling the streets. They also demonstrate that the Black Lives Matter movement that emerged in 2014 has grown to be more radicalized.

The killing of George Floyd is not an isolated incident; on the contrary, it is the result of institutional racism in the US. In the US, a black person is three times more likely to be killed by the police compared to a white person. A quarter of the adult male population have either experienced police violence at least once in their lifetime or were arrested because of simple misdemeanors. The discrimination that the black population face in accessing the right to health, education and housing is also part of the everyday racist violence in the country. American capitalism survives not only through a lack of inclusion of poor black people but also by way of a consistent exclusion, imprisonment, and subjugation to vast exploitation of black people.

Another reason for the growth of the rebellion is its very timing, namely the moment of a health crisis that killed more than 100 thousand people and of a capitalist crisis that has left 40 million people unemployed in just two months. The coronavirus pandemic has revealed all the contradictions of capitalism. Therefore, millions of white Americans, most of whom are young, unemployed or low-wage workers, take part in these actions along with poor black people. The reason why both parties of the U.S. ruling class call on the demonstrators to return back home is because this revolt reflects class anger as well as anger against racism. If this anger was to turn into a constituent force, it wil have the potential to turn the entire system upside down.

The history of the United States is the history of expansionism, colonialism, and racism but it is also the history of struggle against all these forces by blacks, minorities, and the working classes. We thus own these struggles as our own, and we consider this great rebellion erupting in the heart of imperialism as a source of hope and inspiration for all of us.

However, international solidarity requires the fight against racism and fascism at our respective homes too. We know that people who has been living in the lands on which Turkey was built upon, people with non-conforming genders and sexual orientations, workers, and all the oppressed and exploited have been systematically discriminated against. Not a single method used by governments and the capital to hide and cover up these discriminations could prevent us from fighting against them together. We, as blacks and whites, Kurds and Turks, as LGBTI +, as women, as the oppressed, as workers, and as immigrants will all fight together against capitalism all over the world.

Long live the sisterhood of people!

The Party of Socialist Workers