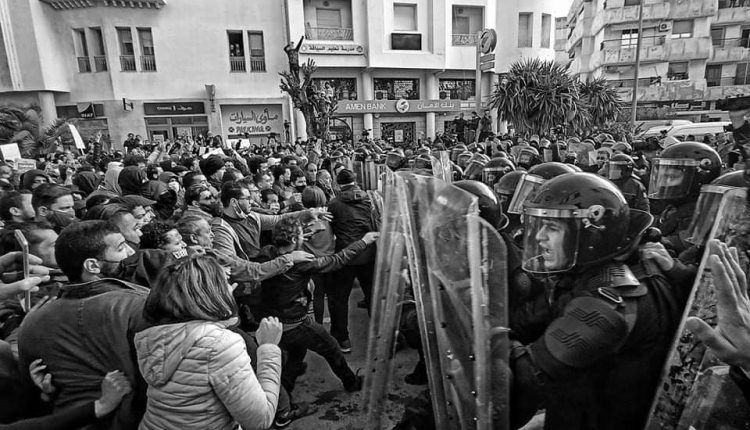 Mobilisations have been going on in Tunisia since the night of 14 January. The popular uprising that started in December 2010 demanding work, bread and dignified life, overthrew the dictatorship of Ben Ali, who had ruled the country for 24 years, on 14 January 2011. Tunisian people claim a new revolution! “No fear! The streets belong to the people!” -people are chanting in massive protests.

Before the 10th anniversary of the Tunisian revolution, which triggered a revolutionary process spreading to many countries in North Africa and the Middle East, the Tunisian government declared a 4-day-long full closure and ban on street actions and demonstrations under the excuse of putting forward measures against the COVID-19 pandemic.

Although the officials of the technocrat Mesishi government, which came to power in September 2020 with the support of a significant majority of the parliament (the Muslim Brotherhood Tunisian Party Nahda Movement, the Heart of Tunisia, Reclamation, Long Live Tunisia, the National Bloc and the Future Party are among his supporters), justified this ban on grounds of “public health,” its main purpose of implementation was to prevent demonstrations on the occasion of the 10th anniversary of the revolution. The social and economic demands, which brought forth the popular uprising that put an end to the dictatorship regime in 2010, have not been met in the past 10 years. Tunisian workers’ living conditions have become even more unacceptable since then. After the overthrow of Ben Ali, the primary goal of the Tunisian ruling blocs was to ensure the continuation of capitalist exploitation policies by making partial democratic arrangements within the business as usual. And how broad sections of the Tunisian left understood the revolutionary process was essentially shaped by the gradualist/stages perspective that contends that democracy should be built first and the social and economic transformations could take place only then.

The result was that the Tunisian masses were condemned to greater unemployment, poverty, exploitation, and inequality for the sake of partial democratic gains. Corruption did not stop and continued deepening; the amount of foreign debt that the country has increased by approximately 75 per cent since 2010. The bourgeois parties signed a 4-year agreement with the IMF in 2016 to procure an exit from the crisis in their favour, and they tried to make workers pay the cost of the crisis through new austerity plans. It is precisely because of this situation that there took place further uprisings in the country in 2013 and 2016, again with the same demands on work, bread, and dignified life. And now the Tunisian masses are back on the stage of history to claim their revolution.

Today, with the COVID-19 pandemic that has been going on for almost a year, the living conditions of Tunisian workers have worsened even more. Whereas the government imposes bans on grounds of “public health,” official unemployment in the country has reached 18-19 per cent band, and one out of every three young people is unemployed. In the mid-west region of the country, which was the centre of the revolutionary process that started in 2010, these rates go even higher. In the mid-west, which has historically been the least invested region of the country, nearly 50 per cent of the population is trying to make a living for $1.5-2 a day. While the public lacks healthy nutrition and shelter, the sovereigns expect workers and the youth to show their allegiance to an “unhealthy” democracy.

It is precise because of these circumstances that the country has been witnessing spontaneous mobilisations in over 15 cities in the last five days, primarily led by the youth and the young unemployed. The government tries to intimidate the masses through repression and coercion by calling on the military to intervene in many regions, proving again that the “fear” of people is the main reason for imposing the recent bans. It tries to blow up with dynamite the most fundamental democratic achievements of the 2010 revolutionary mobilisation by detaining over 630 young people and arresting some of them. The Muslim Brotherhood Tunisian Party Nahda Movement, one of the ruling partners, called on its youth, advising them not to take part in the protests and act together with the law enforcement forces. Its attempt to try dividing the masses once again reveals its counter-revolutionary character. However, despite all these intimidation attempts, Tunisians claim that “the streets belong to the people,” and continue their actions, demanding both the release of those arrested and the fulfilment of their economic and social demands. The same slogan is heard on the streets of Tunisia: “The people want the regime to be destroyed!”

Although it is difficult to predict how the ongoing actions in the country will unfold, it is necessary to highlight a few points based on the lessons of the 2010 revolutionary uprising and the mass revolts that followed in 2013 and 2016. Since the demands of the revolution aimed at social and economic transformation could not and will not be met by the existing bourgeois order, no government that took office in the intervening 10 years has maintained a stable order in the country. In this 10-year period, which witnessed a constant struggle between the oppressed and the rulers, those in power, resorted to democratic reactionary tactics for the survival of the capitalist order (the discourse of national unity, the “Carthaginian Pact” signed in 2016) or, as we see today, tried to intimidate the masses through violence. The bureaucracy of the Tunisian General Workers Union (UGTT), which is the most important class organisation in the country with significant political power since the independence of Tunisia, supported the “democratic transition” in 2011 and assumed a role in it, and later signed the “Carthage Pact” in 2016. These moves clearly showed that union bureaucracy followed the democratic reactionary tactic and looked out for the interests of the bureaucracy rather than the interests of the working class. By calling for the masses to avoid acts of violence and consider dialogue, it declared that it still maintains this position. However, it should be kept in mind that, in the revolutionary mobilizations of 2010-2011, the rank-and-file of UGTT who were part of the struggle applied pressure from below and forced the union bureaucracy to take a position. In this sense, the organised involvement of the Tunisian working class and the fighting rank-and-file within the UGTT in the uprising process will be decisive for the unfolding of the mobilizations.

Large segments of the Tunisian left, who adopt the concept that we should wait for an undetermined period between the democratic and social tasks of the revolution, failed to fight for a workers’ and popular government. That is the reason they did not build an alternative political leadership for the Tunisian workers. This remains the most urgent task during the last 10 years and for today’s Tunisia the building of an organisation and a political programme to break with the existing order along with the fighting masses and stand for class independence. Today, to achieve this goal, the mobilised masses must build their organisms of self-coordinated organisation/defence and develop this coordination further around an emergency action programme to turn it into an alternative political power. These are the most fundamental tasks that stand before us.

As International Workers’ Unity – Fourth International, we stand in solidarity with the struggle of the Tunisian workers for work, bread and dignified life. We support the mobilisation of the Tunisian masses from a political, programmatic and organisational standpoint and towards breaking with the current regime and the capitalist exploitation order!

Release all political prisoners immediately! Army and police force out of the streets!

Immediate cancellation of all agreements with the IMF!

Expropriation of all privatised public institutions without compensation!

Establishment of independent people’s committees to fight corruption! Those involved in corruption should stand trial under the control of these committees!

People want the regime to be destroyed!

For the construction of a centralised and planned economy!Let’s fight for a workers’ government!