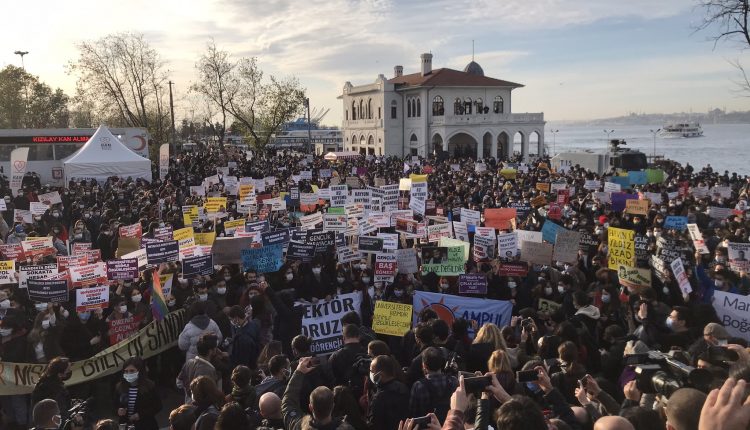 We don’t accept it and we don’t give in: We are uniting our struggles!

“We don’t want a trustee rector!” Following the appointment of Melih Bulu from AKP as the trustee rector of Boğaziçi University on January 1 through a Presidential decree, this slogan first brought together different components of Boğaziçi University. Students, professors, and university workers mobilized against the regime’s seizure of their most basic democratic rights in their own space, that is their right to elect and to be elected in their own university. They said, “we will not give in to a trustee!”

The AKP government has accelerated the transformation of universities in line with the interests of the capital since it came to power in  2002. Since 2016, it has been trying to cement this transformation politically so as to ensure the survival of the Palace regime. This latest effort is evident in the politics of pressure, violence, polarization, and isolation that the regime has been implementing, as it has become unable to tolerate even the slightest quest for democratic rights. The Palace tries to eliminate the most basic democratic practices by appointing trustees to municipalities, NGOs and universities. It long lost its ability to show the slightest flexibility towards any struggle to gain or defend one’s rights.

The regime’s reaction towards the struggle that Boğaziçi students have started with the demand that they want to elect their own rector instead of being content with a trustee, has revealed this inflexibility once again. The very regime, which provides “sentence reduction based on good behavior” to the perpetrators of femicides, inflicted sexual violence on students who defended their right of speech and of decision-making at their university! It tries to suppress the struggle through law enforcement forces and to hammer solidarity through its pro-government media!

However, the resistance that burgeoned at Boğaziçi University has proven one more thing in all its nakedness: This repressive wind can be reversed! Because the government approaches any student, worker, or women’s struggle for fundamental rights with the strategy of “the best defense is an attack,” it now creates the conditions for the generalization and spread of even the simplest resistance.

For this very reason, Boğaziçi students state that their resistance cannot be thought separately from working class resistances, or from women and LGBTI+ struggles towards the implementation of the Istanbul Convention. As a result, students, teachers, and workers from various other universities, workers in resistance from other sectors, and democratic mass organizations could stand in solidarity with Boğaziçi students’ struggle.

Owning up the demands raised by different components of Boğaziçi University who refuse to accept the situation or to give in, is just a start. What we need to do to sustain and develop this struggle is to weave a united struggle until all detained students are released, until Melih Bulu and all other trustees resign, and until students and university components regain their right to elect and be elected as well as their right to oversee decisions that concern them.