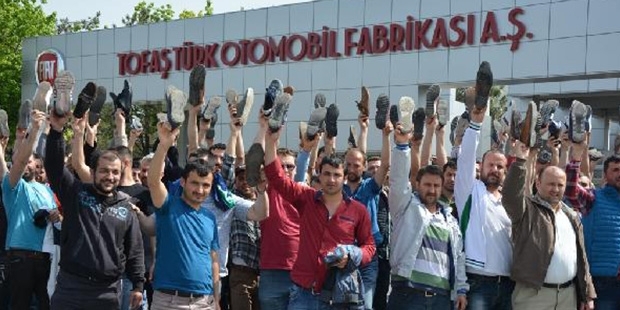 The resistance of metal workers in Bursa is moving to the new and the last phase of its current situation. Maybe the struggle won’t reach the targets of the workers exactly; however, victories have already started to be obtained in parts. Employers are convinced to negotiate directly with the workers’ representatives by leaving Türk Metal (Turkish Metal Trade Union) out. This, above all, is an acquisition in itself and metal workers achieved it with their strong will.

In consequence of the obstruction by the employers’ organization MESS (Metal Industrialists’ Union), they haven’t yet been able to reach an agreement which workers can accept at Renault. The employer of TOFAŞ is trying to convince the workers by giving “word of honour” regarding wage improvement, and of course to divide them in the meantime. At Coşkunöz, the workers could get an approved rise at a certain extent, though not as much as the wages applied at Bosch factory. Workers are excluding Türk Metal. But they will wait for the expiration of their current contracts until 2017 in order to sign a new one and thereafter they will negotiate with the trade union of their wish again. Furthermore, it is agreed upon that employees won’t be dismissed. These are partial but significant victories. These are accomplishments which enable the workers to embed their own class power into their consciousness thoroughly.

As long as MESS is not brought to heel completely with a general strike at least in the whole metal sector, production will start again in resisting workplaces one by one. Unfortunately, current organized power of the working class preclude such strike for the time being due to existing reactionary, bureaucratic or insufficient leaderships dominating union field. What matters now is certainly that resisting workers should reach their targets at an approvable level and turn on the switch with high spirits and consciousness. This will enable them to enter the new struggle period more strongly.

The biggest accomplishment of resisting metal workers in Bursa on behalf of the class is that they started a very significant struggle fire. Struggle and support news is coming from many regions and workplaces (Türk Traktör, Ototrim, ORS…). These struggles, experiences of the resistances and interest and sympathy that they aroused in the masses are denoting that we will face new duties in the upcoming period not only in the metal sector, but also throughout the working class. This new period can start a reorganization period especially in union field. Türk Metal, a union with reactionary leadership, deserves to be subverted due to its traitorous attitude during serious struggle and under conditions of inalterability from within. This can be the historical turning point of trade union struggle.

Undoubtedly, complete liquidation of Türk Metal won’t be immediate and easy by reasons of its organizational extent, the power of squirearchal union system and collaboration of capitalist regime. However, metalworkers’ response to this reactionary union is already becoming widespread in other sections as well. Moreover the representatives system, which was built upon the base of resistances developed spontaneously, provides basis for a much more alive, democratic and militant foundation of a new organizational union period and actualization of workers’ democracy within union struggle by enabling all workers’ participation in decision-making processes.

Bureaucracy of Türk Metal will try to withstand loss by every reactionary method and of course by agreeing with the employers. On the other hand, some dilemmas are waiting the workers who resigned and will resign from this union. It will be very beneficial to protect the rules and the committees that they established by submitting to the approval of the base at any time. But these should take a unionized form in order to be entitled within the frame of union laws and to gather other workers under a united organization by pervading in other workplaces. On option in this sense can be uniting with Birleşik Metal-İş (United Metalworkers’ Union). We use the word “uniting” instead of “joining” particularly, because metal workers in Bursa have concerns and doubts also about this union owing to insufficient struggle level during the last metal sector strike. Therefore, if resisting workers prefer to gather under this trade union, Birleşik Metal should evaluate all positive and negative results of the last period together with those resisters and establish a new administration again with them by holding an extraordinary congress immediately. The problem for Birleşik Metal should be the level and quality of struggle, not the quantity. Beyond quelling resisting metal workers’ concerns; involving their experience and new struggle consciousness in the union and the administration not only strengthens the union, but also constitutes a very important step regarding combative sense of organization of the class.

If resisting workers do not choose such option or Birleşik Metal-İş does not take action itself and call for co-organization with suggestion of a concrete unity instead of waiting for a “call” from them, the remaining option for the workers resigned from Türk Metal is to establish a new trade union. If they choose that way, the new union will doubtlessly be a combative and militant organization acting with the experience of workers’ democracy. Experience and prestige of the resistance will help it to spread to other workplaces. We should keep in mind that this spreading will progress quite slowly and demandingly owing to efforts of reactionary trade union, the employers’ collaboration with them and the workers’ hesitations about joining the processes of changing the union or unionization which they may consider risky during “stagnation” periods. And in the meantime, the new union will have to resist “alone” the difficulties and attacks that they face.

Our suggestion is the unity of resisting metal workers with Birleşik-Metal through a congress. Such development will not only enable them to get strength from struggle history of DİSK (Confederation of Progressive Trade Unions of Turkey), but also provide DİSK with a new struggle boost and make great militant contribution to the unity of the class. However, no matter what they decide, we hope and suggest that they will keep and actualize their struggle and workers’ democracy experience.