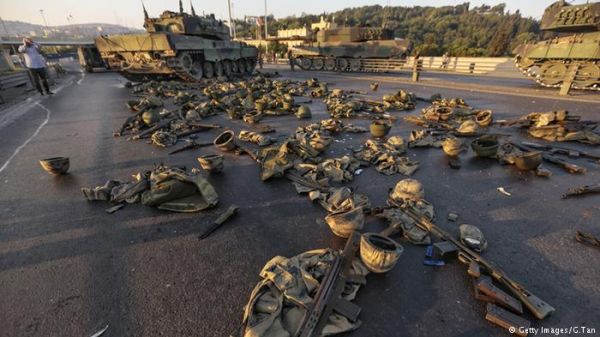 The coup and the purge

All coups and coup attempts are, in and of themselves, are civil wars of small scale; they have winners and losers. While the consequences of the conflict, the fate of the losers, and the way in which the regime will be reshaped primarily depend upon the ideology and intentions of the winner, the former is also contingent upon the character of the means that put an end to the conflict. If only what suppressed the July 15 insurrection were mobilizations led by a democratic mass, new revolutionary democratic winds might have been blowing in the country now. Unfortunately that is not what happened; the coup attempt was deflated and eventually suppressed as a result of conflicts and schemes among the organs of the state. The radical Islamist minorities who took the streets when the defeat of the coup supporters had become more or less obvious on the night of the coup attempt, as well as those who gather in the squares in the following days are no more than masses of people that the sovereign sector called out to the streets in a top-down fashion in order to ensure popular support to its own plans. Unfortunately, these masses are far from being the guarantors of democracy despite all the contrary claims of AKP and the President.

Unlike what the liberals would expect, civil wars or struggles of the kind and scale that are similar to what we had experienced are rarely followed by a period of peace. What really happens is that the winners, even those who gain temporary control, start seeking and carrying out means to crash the other parties and, if possible, to physically purge them. That is in fact what Erdoğan is doing right now and he will continue to do so. However, the scale of the terror he is implementing extends way beyond simply targeting Gülen supporters. It is impossible that ten thousands of people whose names appear on the lists that had clearly been prepared previously are all Gülen supporters; in fact, the names themselves reveal that the lists include ultra nationalists as well as other AKP dissidents. That is to say that the purge and increasing repression spread out like a wildfire.

It would be naïve to expect that this wildfire will not burn the working class. It presents a heaven sent opportunity for the bourgeoisie clustered around AKP, which would want to wipe away whatever is left of the independent working class movement. The way to characterize any attempt to unionize, any strike or resistance, or even any democratic workers’ action as an extension of FETÖ (Gülenist Terrorist Organization) terrorism or as coup advocacy is now paved. Bonapartizm in this sense is strengthening its political and ideological arguments, and its administrative devices and it is made clear that if the latter remained insufficient, powers in favor of Sharia could be mobilized. For instance, the government, fearing the possibility of the insufficiency of its police forces, had already expressed its intention to loosen the gun control requirements allowing civilians to carry licensed arms.

Yet another domain that the wave of purge will serve to concerns the distribution of the loot of the “victory.” Whose will fill the tens of thousands of positions of those who are removed from the military, bureaucracy, occupational groups, firms and so on? Who will be let win the auctions; which firms would change hands and whom will they be given to? It is important to remember that while Gülen supporters constitute one single movement, occupy considerable space in administration and economy and are quite loyal to their leader, Erdoğan is surrounded by a confederacy of movements of smaller scale. As exemplified by Gül, Arınç and Davutoğlu clusters, the personality of the President have proved itself to be rather insufficient to unify these smaller scale movements together. In this state of affairs, administrative purge could serve as temporary solution, however, the conflicts and ruptures that might erupt during the distribution of the loot and the empty positions among those around Erdoğan, which might then lead to the weakening and even to the dissolution of the confederacy. No need to say, Erdoğan would try to take care of these possible future conflicts and ruptures by undertaking yet another purge against terror. Let’s not forget that the so-called “secular and liberal” bourgeoisie could, at any moment, fall under this terror label too.

It has already become obvious that this wave of purge and repression undertaken under the leadership of Erdoğan can not be stopped by a conceivable “democracy front” including sectors ranging from nationalists to social democrats, liberal left, union leaders and reformist socialists. As a matter of fact, this “front” didn’t live up to its principles. When the tanks appeared on the streets, these sectors chose to remain indoors and watch the updates on the TV instead of getting out on the streets to defend democracy and the sovereignty of the Parliament. What is more, they had a death wish that the coup would overthrow Erdoğan even though they were intellectually and discursively against the coup. There were some who even tried to legitimize their attitude by calling it the “responsible line of conduct.” They surrendered the streets to Erdoğan supporters and Islamist frenzy. If a conceivable front composed of various sectors with different class and interest positions could not be mobilized against a coup attempt, how could we expect it to resist against a “legitimate” government who can easily set an entire state mechanism in motion? and with what “democratic” means?

The ongoing process is clearly a class conflict. Some sectors of the bourgeoisie support the “constitutional terror” with hopes to share a portion of the loot. Those who have been integrated into the global economy, while feeling ashamed about the state of democracy in front of the EU and the US, nonetheless cower in fear and try to manage their business under the current conditions. The sectors of the small bourgeoisie who worked themselves into a frenzy of rage due to the effects of the crises and who now have a real chance to obtain positions and become rich are ready to purge any worker beneath them, any secular progressivist, any socialist or revolutionary, and any revolutionary and democratic organization including the unions. These sectors have a leader and all they need is a signal from him. Some don’t even wait for a signal and have already been trying to establish their own dictate in neighborhoods and cities.

What is missing now is the leadership for the working class. The workers do not need democracy fronts of undefined character. Instead they need a solid, determined and courageous leadership, which could mobilize the masses, which declares that a political revolution and a resulting workers’ government are the only conditions for the establishment of democracy in Turkey while fighting for this very cause, and which is aware of the fact that it can only construct itself within and from mass mobilizations. Socialists should incessantly work towards this goal instead of seeking culprits to blame for the current negative situation. If not now, when?

Neither the military coup, nor the (presidential) palace regime! Time for the union of the working class!