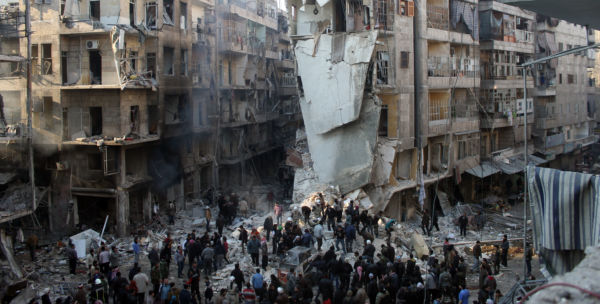 yazar UIT-CI 27 Eylül 2016 tarihinde yayınlandı
Paylaş
The people of Aleppo, which resists the genocide Al Assad, is systematically bombed by Syrian and Russian planes, with the passive complicity of the US.  Aleppo is the Guernica of the 21st century. About 300 thousand people resist this criminal onslaught. They are under siege and heroically still resisting.
Organizations and personalities from around the world have called for a global day of solidarity with the people of Aleppo and demanding an end to these bombings and the site to Aleppo.
The Revolutionary Socialists of the IWU-CI join in this call and call political, social and student organizations that they call themselves democratic, as well as the left, to unite in solidarity with the Syrian people who are resisting heroically in Aleppo and in dozens of cities. In the battle for Aleppo the fate of the Syrian people is being played.
Stop bombing Aleppo!!
We demand the end of siege to Aleppo!  Russians and America out of Syria!
No to ISIS! Turkey and Iran out of Syria!
Down with Al Assad!
Governments must break diplomatic relations with the butcher Al Assad!
Unconditional solidarity with the Syrian people!
International Workers Unity-Fourth International (IWU-FI)
September 26, 2016
Paylaş FacebookTwitterGoogle+ReddItWhatsAppPinterestE-posta