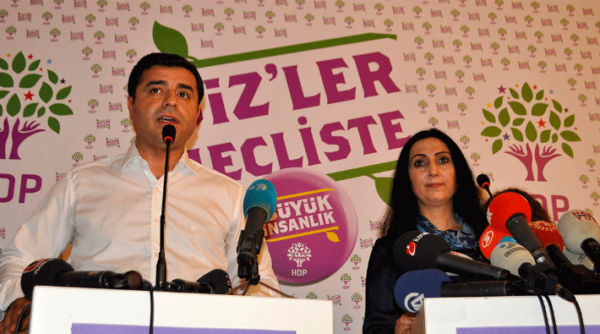 Freedom for all detained HDP deputies! Unified struggle against the repression of the Palace regime!

One more threshold has now been overcome to put Erdoğan’s presidency project in practice; according to the statement of the Ministry of the Interior, 13 People’s Democratic Party (HDP) deputies were sought for detention. 11 deputies including Selahattin Demirtaş and Figen Yüksekdağ, the co-chairs of the party, were detained and the party’s main office was raided by police forces. This operation against HDP deputies stands as continuation of the oppression of the regime that has been increasing by the day.

Following the government decrees that were passed a few days ago, ten thousand public servants including hundreds of KESK (Confederation of Public Workers’ Union) members were purged; approximately 15 oppositional media outlets were shut down; Cumhuriyet newspaper was raided due to its alleged “support to the terrorist organizations PKK/FETÖ; co-majors of Diyarbakır were arrested and were replaced by government-appointed custodians. At the same time, palace regime continues to move forward with its adventurous and dangerous foreign policy in Syria and Iraq that could potentially led the country to war as well as clouding the country with an atmosphere of war.

The Prime Minister Binali Yıldırım had clearly stated the purpose of these political moves: “If the presidency system is not established, the country runs the risk of being divided.” These politics have first been made salient in Erdoğan’s threats of “give me 400 deputies to save yourselves” prior to the June 7 elections. When the election results proved not to be in favor of the dreams of presidency, these politics were put in execution through a Palace coup against the political scene in the country. Since the June 7 elections, we have been witnessing one of the darkest, bloodiest, and oppressive moments in the history of Turkey due to these politics of “presidential system or chaos.” The fundamental reason behind this oppression is the desire of political clique under Erdoğan’s leadership to remain in power at whatever cost and their willingness to eliminate all political opposition in order to be able to do so.

Erdoğan’s reactionary and repressive project of presidency as well as the politics of oppression and exploitation that accompany it is not an inevitable faith for the working class and oppressed peoples of Turkey. While Erdoğan and the AKP power have come to the brink of total political failures many times in the past, they were able to survive these crises due to the lack of a strong political alternative that is representative of the working class and oppressed peoples. Against the increasing oppression and exploitation and against this political power that clearly doesn’t hesitate to lead the country to catastrophic ends to fulfill its own political desires, what needs to be done is an immediate construction of a unified struggle formed by all political institutions, labor unions, and democratic mass organizations that represent the working class and oppressed populations that could repel these attacks in order to get to an ultimate break from this regime of repression and capitalism.