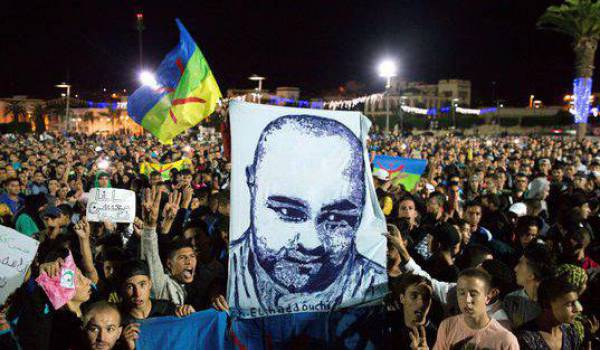 Morocco: Specter of Rif, Nightmare of the King

Last October in Rif city of Al Hoceima in the northern Morocco, a young fishmonger Mouhcine Fikri was crushed to death in the garbage truck while trying to retrieve his fish confiscated and thrown away by the police. Anti-government protests that started after the incident continue. The rallies have flared up and spread across the country in the last week despite of the periodic falls in the protests within 7 months since then. It’s not surprising that revolts against the government take the lead especially in the Rif region. The region, where mainly Amazigh population live, has a long history tyrannized and exposed to violence and discrimination both in terms of politics and culture by the despotic Moroccan regime. Furthermore, the state barely invests in the Rif region compared to the rest of the country within the scope of oppression policies.

Even though the protests started upon the killing of Mouhcine Fikri, what actually lies behind is the expression of the accumulated public anger towards the oppressive regime’s long-standing antidemocratic policies that lead the country to plunder by foreign capital. In 2011, while Tunisian, Egyptian and Syrian masses were mobilized against dictatorship to demand dignified lives, job, social justice and freedom, February 20th Movement was filling the streets in Morocco with the same demands. However, getting worried that the protests could reach to a level as in Tunisia and Egypt, the King made legal regulations by “taking the demands of masses into account to a certain extent”, split the masses and thus was able to prevent the protests. The regulations which the King made just for show or did not enforce at all underlie the fact that now the masses take to the streets again. As a matter of fact, the 2011 experience still remains fresh in the memories of regional people today in spite of the efforts of countries in the region as well as imperialism to divert, control and mitigate the uprisings. More importantly, the conditions that initiated the revolutionary process have intensified and still subsist in many countries.

Demands of masses that took to the streets in the Rif region – the center of mobilizations – under the slogan “corrupt government” and “life with dignity” make up a whole where democratic, social, economic and cultural aspects coincide: trial of the killers of Mouhcine Fikri and 5 people killed during the rallies in 2011; release of all political prisoners in the Rif region; lifting of 1958 law that has turned Al Hoceima into a military area; removal of economic blockade in the region and increasing public expenditures in sectors such as education and healthcare; ending corruption; finding a solution for youth unemployment, and building cultural center, library and theater in the region.

This uprising, which is a consequence of neoliberal, oppressive policies created by the despotic Moroccan regime via imperialism and great capital, is tried to be isolated by this very same regime. Even though the Moroccan state used every means to prevent these demonstrations to create an impact via media in other parts of the country as well as abroad, it was unable to do it. It is necessary to highlight that local committees, formed by Rif people through demonstrations, made the process visible.

Getting anxious that the protests would spread after becoming visible, the regime tried to suppress the mobilization by arresting Nasser Zafzafi, the leader of Hirak Movement leading the struggle in Rif and Al Hoceima, and almost 20 protestors. However, this effort created a counter-effect and caused people in many cities of the country to take to the streets with the same demands: Fez, Marrakesh, Casablanca, Rabat, Oujda, Nador and so on.

In fact, the antidemocratic and economic wreck created by the regime itself is visible not only in Rif region but also countrywide through poverty and exposure to oppression. This enables Amazigh and Moroccan people to communize their struggles against the despotic regime and neoliberal policies. A course united via urgent democratic and economic needs of the country, including the right of Amazigh people to self-determination, will give an opportunity to workers, laborers, youth and women to advance their struggle and make the King’s nightmare much more terrifying.