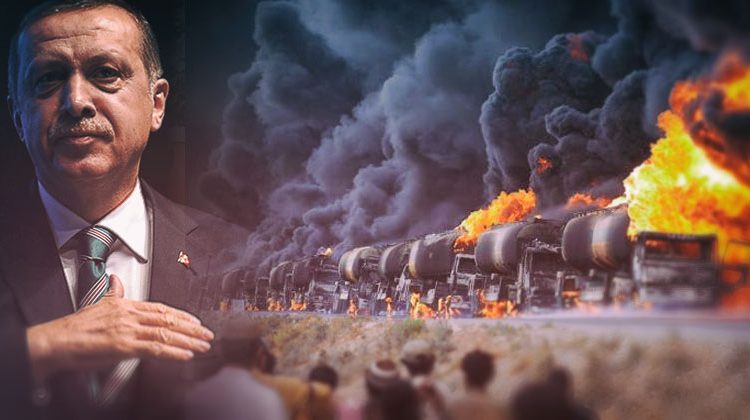 Erdoğan/the Palace continues to make epic history. New heroic deeds add on to this “local and national” epic through steps taken in domestic and foreign politics each and every day. These heroic deeds include several topics from new taxes placed to “prevent division of the country” to the possibility of “a sudden military operation in Kirkuk”.

While the Palace authority keeps on telling that the economy has stepped into a new age, we are no longer “a debtor but a lender” and we have become an “envied country”, we have learnt that new tax additions will be implemented through a bag bill prepared at one night all of a sudden. Supposedly, these new tax additions are absolutely necessary for both fiscal discipline and our defence industry. Don’t get it wrong. There isn’t any regulation for collecting taxes over the bosses’ incomes in the proposal. The burden is once again placed on the workers’ and labourers’ shoulders via indirect taxes. The Palace has found the solution in further increasing indirect taxes in a country where tax debts of the bosses who have close relationships with the Palace are written off, the bosses pay a quite low amount of income tax and a large majority of taxes are collected from workers and poor citizens through indirect taxes! Advocating this “resort” that was received quite negatively, Melih Gökçek asks: “Would it be better if the country was divided?” That is to say, if such tax additions are not implemented, then our country, which has become “great and powerful” Turkey thanks to 15 years of AKP’s ruling, may face the risk of division at any moment…

It is obvious that things are not on track for the Palace. All those epics and heroic stories are not sufficient to conceal the reality of economic destruction. The government accepts in the Medium Term Plan that the unemployment hit 10% and external debt ratio has surpassed the half of national income. Moreover, industrial and agricultural production is regressing on a regular basis. On the other hand, an economic growth based on construction, arms industry and energy sector, which only enriched the oligarchs close to the Palace, has come to an end. Economic devastation is once again burdened on the workers through tax robbery, high inflation, low wage increases and strike bans.

Things are not on track abroad, as well. Through expansionist, sectarian and racist foreign policy, the Palace authority was first drifted towards a “valuable loneliness” before “zero problems with neighbours” policy, and then towards an “unworthy loneliness” after a little while. Finally, upon the independence decision of Barzani – who was the last ally of the Palace in the region- the Palace concluded that they were misguided by Barzani. Today, from the fantasies of annexing Iraqi Kurdistan, we ended up with a policy of bringing Barzani into line by collaborating with central governments of Iraq, Iran and Syria which were once assumed enemies. Consequences of the Palace regime’s crashed adventurous foreign policies become clear with the emergence of new risks of war for the future of peoples in Turkey. The Palace regime, on the other hand, is occupied with wiping out its liabilities in internally and externally crashed policies by warmongering.

The Palace is unable to rule the country. It tries to prolong its existence daily through oppressive and violent policies while dragging the country into the abyss with itself. That’s why getting rid of the Palace regime is the most urgent duty today. The opposition’s strategy is waiting for 2019 elections, which serves for nothing but legitimization of the Palace. Therefore, as IDP we call for an independent and sovereign constituent assembly in order to break loose from the Palace regime. We can stop economic destruction and war politics of the Palace regime only through a united struggle and a common action plan. All labour organizations, notably the unions, leftist and socialist parties and HDP bear a historical responsibility to this end.