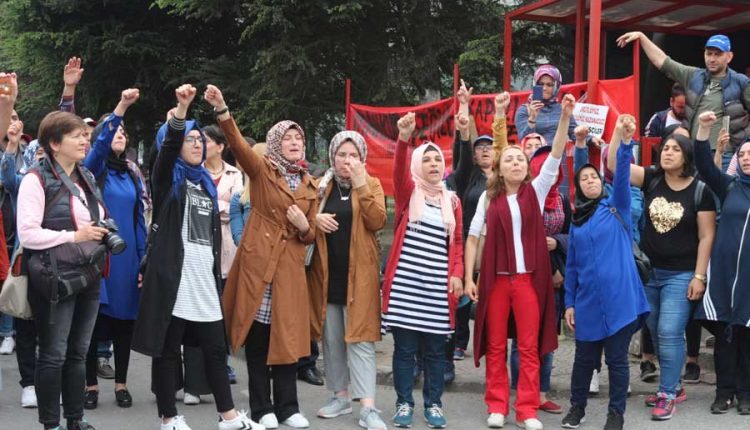 The palace is dragging the country to disaster… The key to solution is mobilization!

After alliance negotiations have taken the final shape upon the decision of the palace alliance for “snap elections”, we are on the way to June 24 elections in an atmosphere where two main bourgeois camps come to the forefront. On one side, there is “Public alliance” trying to guarantee One Man regime under the leadership of Recep Tayyip Erdogan. And on the other side, there is “Nation alliance” which has explained to target “return to parliamentary system”. Besides these two main camps, HDP (People’s Democratic Party) aims to pass 10% electoral threshold by joining parliamentary elections alone. For presidential elections, the party has nominated Selahattin Demirtaş who has been in prison for 1.5 years.

The main purpose of “Public alliance” in resetting the elections to an earlier date was to win the elections by catching the opposition off guard before an approaching economic crisis and to buy time to sustain its decaying power. However, backdating the elections does not seem to solve the problems of “Public alliance”. Economic crisis dynamics have also been brought forward by resetting of the elections to an earlier date, and this result has been reflected on extraordinary depreciation of Turkish Lira against foreign currencies. Given the total external debt of 400 billion dollars and foreign trade deficit of 50 billion dollars, this drastic increase in foreign currencies will inevitably mean company bankruptcies and bank failures, therefore paving the way for a wave of dismissals and public sector cuts. It is now quite obvious that 16-year economic policies of Erdogan and AKP (Justice and Development Party) has dragged the country to an economic disaster.

Knowing this situation, the Palace supporters are trying hard to maintain the oppressive and anti-worker regime by gathering all powers in the hands of the President. On the other side, the parties composing the “Nation alliance” are making generous promises of democratic and economic rights while trying to assure that they will ensure “orderly transition” to national and international capital after Erdogan. However, the upcoming economic crisis does not allow for such “generosities”. The new government after the elections will either apply austerity policies of IMF or will have to take urgent economical measures in favor of working people by making the capital – the real responsible for the crisis – pay for it. In an atmosphere where many people are talking about being “local” and “national”, it is beyond any doubt that both “Public alliance” and “Nation alliance” will apply to IMF and make the working people pay the price of crisis.

The most poignant problem of our period is the fact that a worker-laborer option which is independent of the capital and addresses our democratic and social demands in the elections and beyond that could not be escalated. Union leaders and class collaborator leftist-socialist movements who prefer to do politics with the parties of order instead of escalating such an option are responsible for this picture. This situation hinders the visibility of an alternative of breaking loose from One Man regime which tries to straitjacket the country and from the capitalist order which drags the working class to an economic disaster. On the other hand, HDP is lacking a class perspective and very far from closing this gap due to its attitude distant from class mobilization of worker and laborer masses. However, within a condition that is destitute of a worker-laborer alliance, it is crucial to support HDP and Demirtaş in the elections to stop One Man regime and make democratic demands of Kurdish people visible.

Regardless of the election results, the new government to be formed under the current economic and political crisis conditions will be a weak, unstable government. We should be ready for mobilizations to defend our democratic and economic rights against the oppressive and anti-worker implementations of the regime.