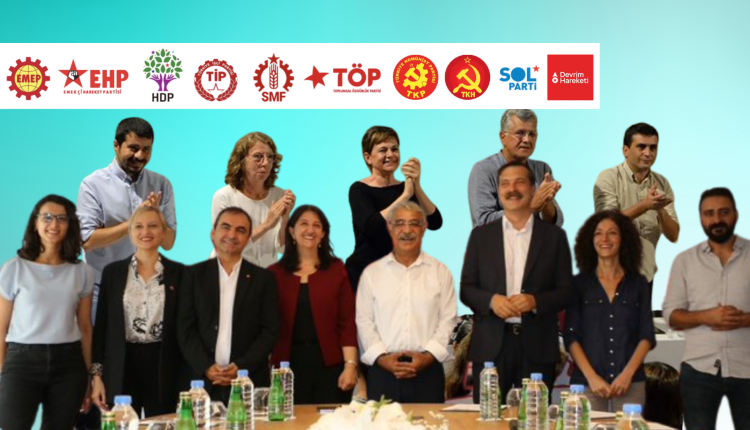 Negotiations for possible alliances for the presidential and parliamentary elections, which are to take place within nine months at most, have been going on within the socialist movement for some time now. These talks now reached a certain maturity. First, on August 21, TKP (Communist Party of Turkey), Sol Parti (Left Party), TKH (Communist Movement of Turkey) and Devrim Hareketi (Revolution Movement) announced the establishment of the “Socialist Power Union” (SGB). Subsequently on August 25, HDP (Peoples’ Democratic Party), TİP (Workers’ Party of Turkey), EMEP (Labor Party), EHP (Labor Movement Party), TÖP (Social Freedom Party) and SMF (Federation of Socialist Assemblies) announced that they had formed “Labor and Freedom Alliance” (EÖİ). While the SGB explained the grounds for their alliance ground through a five-point statement, EÖİ stated that they would announce the formal declaration and roadmap of their alliance in late September.

Under circumstances of multiple crises that we have been going through, we expressed the vitality of the necessity of raising a political alternative independent from bourgeois parties under the leadership of socialists and labor organizations multiple times. Having said that, we give great importance to the announcements of the establishment of both SGB and EÖİ. At the same time, we have raised various criticisms against and suggestions towards the constituents of these two alliances, about both the issue of political program and the question of “what kind of alliance?” At the programmatic level, we emphasize the urgency of an independent line that aims to break away from the oppressive regime and capitalism and that does not back itself up to the Nation Alliance. At the organizational level, we stress the exigency of an understanding that avoids contention with a narrow organizing perspective and aims at the broadest unity of socialists and labor organizations. Let’s try to take a closer look at whether these two alliance initiatives can meet these needs.

First of all, it is obvious that the destruction and corruption caused by the AKP-MHP alliance has created massive social discontent and led to a search for alternatives, putting tremendous pressure on the socialist movement. This pressure has been managed, on the one hand, by heading in the direction of initiatives for forming united struggles and establishing alliances, and on the other hand, by supporting of the Table of Six, which is the strongest alternative in sight to the People’s Alliance.

It is understandable that the masses, overwhelmed by the Erdogan regime and desiring to get rid of his administration as soon as possible, turn to the so-called strongest alternative. The socialist movement, on the contrary, needs to be able to distinguish itself clearly from bourgeois alternatives and to define a political line that emphasizes a radical break with the order, precisely in such moments of crisis. However, the founding statements of both the SGB and the EÖİ show that there is no change in their attitude of choosing the “lesser evil.”

Absent in the statements of both alliances are the strategy of a workers’ government and the perspective of a break with capitalism. The proposals for an exit from the current regime are expressed in vague terms such as “popular sovereignty” (EÖİ) or “establishment of integrated mechanisms” (SGB); the call for a Constituent Assembly for the making of a new constitution is avoided by both. Concretely speaking, both alliances refrain from nominating a joint candidate independent of the bourgeoisie for the presidential elections. Instead, they expect the Table of Six to nominate a “non-right-wing” candidate. Clearly, the limits of horizons of both alliances do not go beyond being a “strong left opposition under the rule of Nation Alliance.” Moreover, the fact that the Kurdish issue was not mentioned at all in the statement of the SGB and the attitudes of its constituents to date indicate that what distinguishes them has to do more with Turkish nationalism and contention with a narrow organizing perspective rather than the socialist strategy per se.

We will keep emphasizing that a labor-oriented, independent, and united alliance is urgent and vital, not only for the presidential and parliamentary elections, but also for class struggle and other fields at large. Notwithstanding our criticisms, we hope that both the SGB and the EÖİ will serve this need one way or another. We will continue supporting every attempt and effort that aims to break the current system of exploitation and oppression as opposed to merely eroding it and to raise the independent alternative of workers instead of offering a legitimization to the Nation Alliance from within left.