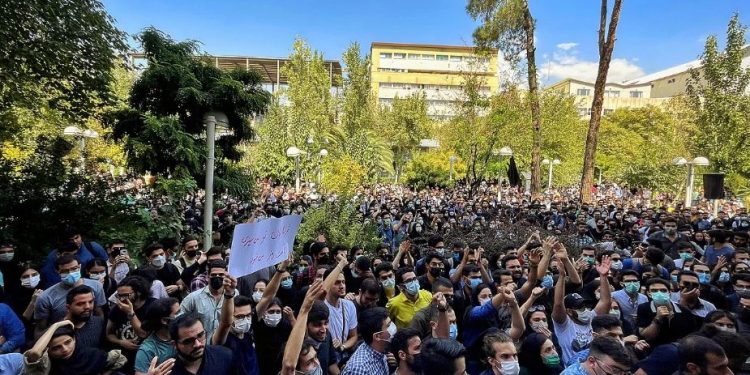 The Iranian revolution continues! International solidarity with the revolutionary mobilization of the working peoples of Iran against the dictatorship regime!

The popular uprising that started two months ago in Iran has opened up a revolutionary process in the country against the regime of the Islamic Republic. The uprising has become massive which is led by women after the murder of Mahsa Jina Amini and now has demands aiming at the abolition of the institutions of the mullah regime such as the moral police, the Ministry of Guidance, Basij and Velayat-e Faqih.

The demands of the masses exceeded the abolition of the regime’s institutions and reached the point of overthrowing the 43-year-old dictatorship while wider sections of Iranian society have begun to participate in the mobilizations in response to the Islamic Republic regime’s attempt to crush the protests by using oppression and violence through the army, Revolutionary Guards, Basij and civilian paramilitary forces.

Demands of Iranian women against sharia oppression, patriarchal violence and capitalist exploitation… Democratic and economic demands of the Iranian working class… Democratic, economic and social demands of the ethnic and religious minorities of the country, such as Kurds, Baluchis and Azeris, who have been subjected to further exploitation by the regime over the years… Demand for freedom of the population under the age of 30, that is, the youth, who make up 60 percent of the population… And demand of the Iranian society as a whole to get rid of the straitjacket imposed on it by the regime… All these demands in the past two months have turned into a revolutionary popular uprising by uniting around the demand of “The people want the overthrow of the regime” with the slogans “Death to the dictator!”, “We do not want the Islamic Republic!”, “Woman, life, freedom!”, “Death to the tyrant, whether he is the supreme leader or the shah!”

Although the intense pressure and violence by the mullah regime towards the mobilizations has led to the death of around 500 people (sources in conflict in Iran state that this number is close to 1000) and the arrest of more than 15 thousand people, working peoples of Iran do not back down on their struggle against the regime. The Islamic Republic regime, which has lost its legitimacy in the eyes of the masses, is aware that it will not be able to maintain its power if it steps back from its policies of violence. For this reason, it constantly strives to increase the oppression on the masses. It is also in this context that 227 of the 290 deputies of the Iranian parliament called the judiciary to sentence 14,800 people arrested during the mobilizations to death on charges of “gathering against national security”, “conflict with the Islamic Republic” and “corruption on earth”. On the other hand, the regime is trying to divide the united anger of the Iranian peoples towards itself by using the ethnic and religious tensions it has created historically on Iranian society by applying a more intense attack on the mobilizations, especially in Kurdistan and Balochistan, by pushing the organizations there to take more radical positions. While massacres against civilians were carried out in many cities of Kurdistan and Balochistan for more than two months, there is information that chemical gas was used by the regime forces in these massacres in Kurdish provinces. In addition, the protesters also state that the dictatorship regime uses sexual violence in prisons against those arrested during the mobilizations.

However, all these maneuvers and attempts of the regime to intimidate the masses have so far been let down by the struggle. The closest example of this is the general action process announced in the country on November 15, 16 and 17. This three-day protest, which was announced on the occasion of the anniversary of the revolt that started after the increase in gasoline prices in Iran in 2019, and in the memory of nearly 4,000 people who were killed by the regime in this uprising, made the anti-regime protests even more massive. Currently, the youth continue to organize boycotts at many universities, high schools and secondary schools. Women, Kurds, Baluchis and Iranian working people continue their protests in many cities and towns. The Iranian working class is organizing strikes in many sectors such as oil, natural gas, metal, iron and steel, glass, food, education and transportation. At the same time, the merchants and tradespeople, who were ideologically, economically and politically among the biggest partners of the mullah class during the construction of the Islamic Republic regime, have also closed their stores and participated in the mobilizations.

End to the dictatorship regime! Let’s establish a national coordination of workers’ and struggle committees!

All these sectors, while expressing their own demands, combine their struggles with the point of overthrowing the dictatorship regime. The anti-regime revolutionary uprising, which started spontaneously, also de facto targets all the representatives of the capitalist exploitation system. The mobilized masses are also targeting the representatives of the bourgeois order, such as the reformist wing or the shahist, pro-monarchy sectors within the Islamic Republic regime, whose interests lie in the continuation of the capitalist exploitation order in the face of the deepening crisis of the regime and who want to benefit from the uprising for this purpose. The consciousness of breaking away from the dictatorship regime and the capitalist exploitation system, which the working people of Iran reached in their mobilization, is crystalized in the slogan of “Death to the tyrant, whether he is the supreme leader or the shah!”

As the International Workers’ Unity – Fourth International (IWU-FI), we salute the revolutionary uprising of the working peoples of Iran against the dictatorial, capitalist, counter-revolutionary Islamic Republic regime and convey our full internationalist solidarity!

We believe that one of the most fundamental elements that gives a revolutionary character to the uprising of the Iranian working people is that the mobilized masses have begun to build their own self-organizations, workers’ councils and local committees within action. The Iranian class struggle, which had the experience of shuras (councils) during the 1979 process and of councils during the worker strikes that marked the years of 2017-2020, is still trying to create its own dual power organ cores against the dictatorship regime by using these examples.

We think that the development and spread of these organizations is of vital importance in terms of ensuring the continuity of the struggle of women, youth, working class, Kurds, Baluchis, Azeris, Arabs and all oppressed sectors. The revolutionary process also necessitates the development and spread of these mass self-organizations for the self-defense of the mobilized working people in the face of the intense pressure and violence applied by the mullah regime. Bringing these organizations together around a national coordination and bringing them to the point of organizing a general strike will be decisive in the overthrow of the Islamic Republic regime.

As the International Workers’ Unity – Fourth International (IWU-FI), precisely for these reasons, we believe that this coordination should be equipped with a revolutionary action program to make the masses break away from the dictatorship and capitalist exploitation system. And accordingly, it is necessary to continue struggle for the construction of a revolutionary socialist leadership in order to ensure breaking away in favor of the workers and working class.

A struggle for an Independent and Sovereign Constitutional Assembly which will consign the Islamic Republic’s constitution to the dustbin of the history and create a new constitution for the needs of women, working class and peoples is necessary.

In this line, the struggle should be directed towards the construction of a worker-laborer government which will carry it to an absolute breaking away from the regime, capitalist exploitation system and imperialism, and protect the victories of the working class and all oppressed sections.

As IWU-FI, we’ll continue to unconditionally support the struggle of the Iranian working people, women, youth, working class, Kurds, Baluchis, Azeris, Arabs and all other oppressed sections to break away from the dictatorship and exploitation system.

In order for the revolutionary uprising to be victorious, as IWU-FI, we call the unions, women and youth organizations, political parties which embrace the democratic demands and the world left for an international solidarity. We invite them to organize unified protests in front of the embassies and consulates, and on the streets in all countries.

End to the criminalization of mobilizations and the execution of death penalty!

End to the sharia oppression, patriarchal violence and capitalist exploitation of women and LGBTIQ!

Repeal of the mandatory hijab law!

Entitlement of all the democratic rights of the oppressed nations, including the right to self-determination!

End to the dictatorship regime of mullahs!