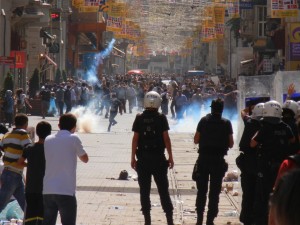 Istanbul intifada of May 31

Istanbul had an overturning day on May 31. Brutal attacks of security forces on demonstrations against the capitalists’ confiscation of Gezi Park from public have caused an unpredicted mass mobilization for the last four days.

The movement first started in Taksim, and within 24 hours, spreaded over the whole city spontaneously. This spontaneous movement structured people’s demands; it got organized in order to maintain the fight and to provide means for it; and it defended itself. This extraordinary mobilization in Taksim represents an extremely wide social range of masses.

The nature of the struggle points out to a larger reaction that a mere protection of Gezi Park. The real victims of neoliberal policies and retrogressive regulations enacted by the AKP government – women, young people, workers who have been condemned to wretched wages under unsecured labor conditions, and the unemployed and functionaries who are concerned about future – formed a collective dynamic of struggle.

The accumulation of rage against the arrogance of Tayyip Erdoğan’s goverment caused by a combination of the assassination of Hrant Dink, Reyhanlı attacks, Roboski massacre, the proposed abortion law and alcohol bans are in fact the main reasons behind of Gezi Park reactions.

While the struggling masses have been presenting a will-power to maintain the mobilization, the ruling classes have been divided, too. The pen-holders of the bourgeois media have left the Prime Minister without support; Gulen’s affiliated media organs, and even the former minister Günay have been harshly criticizing the government while the CHP and the MHP have been lying heavy on the government, talking pretentiously about lack of governance and control.

While the main responsible of this rage, Prime Minister has made no official comments throughout the day, Municipal Kadir Topbaş and Governor Hüseyin Mutlu lied shamelessly to public during the press conference they held. While Topbaş declared that a shopping mall will not be constructed at where Gezi Park is now, which entirely contradicts with Erdoğan’s previous comments on the matter, Mutlu defended brutal police attacks as by trying to justify them as attempts to “block illegal acts.”

The permanence and continuity of the mobilization has a great importance. In fact, it may bring about a historical defeat of the government. It is urgent and necessary to build a coordination committee which will be formed by the representatives of trade associations, unions, political parties, and others in order to collectivize and organize the struggle as well as to protect it.

The police chief Hüseyin Çapkın and Governor of İstanbul Hüseyin Mutlu must be dismissed immediately!

Interior Minister Muammer Güler who has proven himself to be the enemy of the working class and democracy, and who is the main responsible of the May 31 events should also be called unseated immediately.

Protestors under custody should be released immediately and the Prime Minister should declare the cancellation of the Project of Gezi Parkı to masses.

The dictatorship of deceit is cracking…. Government, step down!