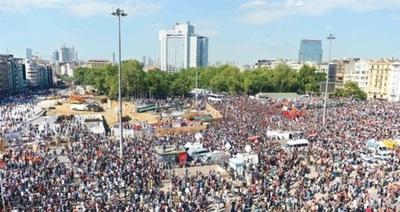 The dictatorship of deceit is cracking…. Government, step down!

The resistance that had started to protect Gezi Park have transformed into a public upheaval in response to the brutal police violence and to the Turkish government’s uncompromising attitude. The anger toward retrogressive, oppressive and labour-hostile policies carried out by the AKP government throughout its 10,5 years-long exercise of power, ignited the fuse of a public rebellion, embodied in the slogan “Government, Step Down!”

The AKP government has tried to legitimize its power by building a so to speak dictatorship during the past 10 years. Despite the economic growth, flexible and unsecure working conditions has become the norm and the poverty of the working-class has worsened and Turkey has become one of the countries with the most unjust and unequal income distribution. The democratic rights and freedoms have been restricted within the framework of the Law on Fight Against Terrorism (Terörle Mücadele Kanunu); the brutal state terror exercised by the police forces against the protestors has been normalized and become commonplace.

Throughout the AKP government’s rule, there have been various struggles against its oppressive and exploitative policies. Nonetheless, all of these struggles unfortunately had a partial and isolated nature. But today, we have a mass public movement, which has developed and grew spontaneously by itself and has spread to the whole country. It is motivated by the accumulation of anger toward the government’s and the Prime Minister Erdogan’s attitudes and discourses, which have lately and gradually become more and more authoritarian. This movement also made Erdogan face his first significant defeat and deeply shook the government’s legitimacy.

The protests that initially took place in Istanbul and Ankara have not only spread to dozens of cities in the country, but they have also taken place in various neighborhoods and have not remained limited to city centers – local mobilizations are organized and local protests are taking place in various working-class neighborhoods. Now that millions of people in whole country have gone out to streets and that the government is running the danger of a historical defeat, it is time to advance the struggle! First and foremost, it is very urgent to have a coordination committee with participants from the representatives of unions, chambers, and political parties to lead the struggle in order to collectivize the struggle and ensure its safety. It is also urgent to generate local organisms such as neighborhood assemblies in furtherance of conveying an organized character to the neighborhood mobilizations and of assuring coordination among them.

In addition to enlarging the struggle on the streets, the unions should take upon a genuine collective organization toward general strike in order to actualize the demand, exclaimed by millions of people – “Government, Step Down!” If all workers collectively exercise their power arising from their productive force and switch off their machines, such exercise would write the death-warrant of the AKP government. The administrations of unions should not escape from this historical duty.

The May 31 movement, developed by itself through the defense of Gezi Park, has quickly transformed into a “STOP!” warning to the government which is not simply against the urban project of concretion of Gezi Park but also in major opposition to the anti-democratic, retrogressive and neoliberal policies carried out by the AKP Government for the past 10,5 years.

This movement, along with Gezi Park Resistance, has grown by spreading day-to-day despite the government’s and police forces’ repression and violence, has brought young people, workers, women, and artists who claimed their own labour, city, environment and lives together, and has ignited the fuse of a struggle for a “more free, more democratic, more equal and more just” future.

1. Gezi Park project should be withdrawn along with all neoliberal policy implementations concerning cities, environment and labour.

2. All de facto and juristic bans against freedom of speech and thought, of assemblies, demonstrations, and marches should be immediately lifted. All arbitrary hindrances of democratic access and usage of public squares, including Taksim square, should be ceased.

3. Those who are put under custody during the mobilization, and anybody who has been arrested or sentenced for having exercised their democratic rights should be released.

5. The AKP Government who made millions go out to streets due to its anti-democratic discourse and practices has lost its legitimacy. The government should immediately call for early elections and step down. A general election with no electoral barrage in which all parties and candidates could compete on an equal terms should immediately take place.

As Isci Cephesi, our call is undertake the fabrication of a collective organism of the mass struggle around these urgent demands. Such fabrication necessitates a coordination committee with participants from the representatives of unions, chambers, political parties and other groups. It is also necessary and urgent to generate local organisms such as neighborhood assemblies in furtherance of conveying an organized character to the neighborhood mobilizations and of assuring coordination among them. Such collective organisms would be the only way to ensure the future continuity of this mass mobilization that has so far succeeded in shaking the basis of the current political power.

Istanbul intifada of May 31