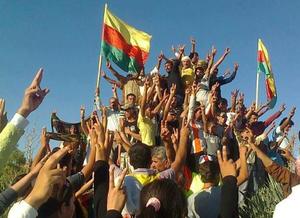 Why did the ISIS attack Kobanê? There is not an easy explanation for it. The answer could be the following if we were to disregard the much deeper strategic, political and “divine” reasons: to unite the ISIS-dominated areas by capturing the Rojava (West Kurdistan in Kurdish, Kurdistan of Syria) cantons, which constitute a physical disconnection between these areas – the districts and the cities in the north; and to get to Aleppo, the economic centre of Syria, from the north by capturing the westernmost Afrin after Kobanê. Yet another motive could be to capture Cizre that is located at the far east of Syria and that has an important oil field (Rimela), which would allow ISIS to both get all the oil fields under its dominance and to guarantee a continuous supply of military, organizational and logistic needs as the entire border with the Republic of Turkey would then be under their control.

If the ISIS achieved these goals, they would have captured all the big cities in northern Syria, which means all the significant economic resources and the oil gains. Moreover, this would mean that the ISIS has almost reached the sea as well. It is certain that such a scenario would allow the state-like structure of the organization to become more efficient and the number of its supporters to grow while increasing its power and recognition in the international arena. From a strategic point of view, this is the situation in broad strokes.

We must say that the “anti-imperialist” rumour that the USA and Israel had founded ISIS in order to intervene in the region does not reflect the reality. While this kind of exciting “analyses” save us from the pain of dealing with a bunch of “boring” historical, social, economic and political reasons about the world and the region, they don’t actually go further then being mere propaganda. This certainly doesn’t mean that the ISIS is “simply” an autochthonous organisation. We can easily say that the ISIS had had serious direct and indirect relations with imperialist powers, particularly with the USA and with the regional reactionaries such as Turkey and Saudi Arabia for a long period of time, at least during their counter-revolutionary activities in Syria. These relations had probably become quite diverse over time. In addition, the ISIS had also collaborated with the Assad regime at times. However, the power of the group does not come from being the “servant” to imperialism but from its ability to use such position and the opportunities it provides to further their independent goals. Unfortunately, the ISIS have achieved to become a real social-political power due to its organizational and political autonomy unlike the old communist parties in the region, which liquidated themselves before the nationalist-autocratic regimes.

As for Turkey… the state and the AKP government have been carrying out a strategy of liquidation, or if not liquidation, of control of the Kurdish national movement in Turkey under the name of the “resolution process.” This same strategy is now being applied in Rojava. The Turkish state has adopted a hostile attitude towards the Rojava experience from the beginning, as this experience constitutes a dangerous example before the Kurds in Turkey. This state hostility comes in different forms, such as attempts to lock Rojava by closing the borders, which had been thrown open to ISIS, to the Kurds, provision of weapon supplies, “health services” and logistical conveniences as well as permission for territorial explorations to the ISIS over its own territories during their attacks on the cantons. Given the differences between the Western and the Turkish political strategies regarding the region, especially regarding Syria, the AKP government have gone under serious pressure from the West when its bloody relation with the ISIS got revealed.

The government wouldn’t mind it if the ISIS swept away Rojava and become Turkey’s neighbour at the border. This would have been useful in war against the Assad regime even though the situation carries several risks. However, the West has chosen to push for a “political solution” in Syria and has started to see the ISIS as its number one enemy, which gradually invalidated the Turkish government’s best-case scenario. While the Turkish government avoids a direct war with the ISIS, it brought a possibility of intervention in the situation to the table using the refugees as an excuse in order to get closest to their best-case scenario. Such intervention is expressed in the talks about creating a no-fly “buffer zone,” and if not, a linear or pocketed “secure zone.” These kind of zones would virtually bring the end of the autonomy in Rojava. Y. Akdoğan (the Deputy Prime Minister) disclosed the Turkish government’s intention to strangle Rojava when he said that the memorandum to approve the sending of the troops to Syria and Iraq would not only concern the ISIS but also other terrorist organizations. The prime minister also confirmed this intention when he spoke about the possibility of a buffer or secure zone by saying, “We must keep struggling with the separatist terrorist organizations persistently.” Meanwhile, the matters concerning the Syrian regime are not taken off the table; the Turkish government requires the Assad government to be the other target in order to join the “coalition.”

As for the Kurds…

Despite the self-confidence that the autonomy in Rojava brought about, the Kurds have reached a point of asking for help in a short period of time, and asking for it from whoever is willing to give it no matter who it is. This state of affairs demonstrates the limits of local democracy and of the project of democratic autonomy. During these times of difficulty, the Kurds do not only deal with the hostile stance of Turkey. They are also faced with the attitude of class hostility of the Barzani government, which recently saved itself thanks to the help of the US bombarding, and thanks to the PKK-PYD to some extent. All these reveal that the true liberation and freedom of the Kurdish people does not lie in the isolated projects of democracy with ambiguous class character and/or in diplomatic games of power balance. It lies in the common struggle of workers and popular masses of the region against imperialism and regional reactionism, and against their own bourgeoisie.

Put briefly, we are against all kinds of imperialist interventions no matter what their reasons are or could be. Even if the aim is to destroy the ISIS or what you have, the USA bombardment, the bombardment from the Western and Arab states that are in coalition with the USA, or the Turkish buffer or secure zone projects would only complicate the situation further. After all, the real aim of these powers is to suppress the revolutionary dynamics in the Middle East including the Kurdish popular masses’ struggle for freedom and liberation, just like they did it in Syria with the help of their “enemy brothers” like Iran and Russia…

Finally, it is necessary to say a few words to the Turkish state: Now that you finally accepted the ISIS as a “terrorist organization,” then it is time to break all your direct and indirect connections with this organization! Seal the borders to the ISIS and open them up to all those who succour the people of Rojava. Lift all the obstacles to the armament of YPG/YPJ! And then you will see that there is no need for any kind of “coalition,” any bombardment or any project of “who-knows-what” zone!