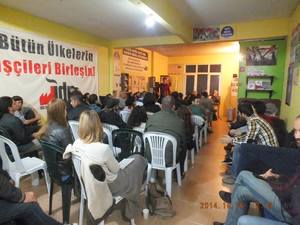 Syria, Kobanê, Refugees Panel: People in “Palestinized” Syria will not give up the struggle

Eyüp people showed great interest to the panel. Atakan Ciftci, who made the opening speech of the panel, underlined the emphasis of evaluating the process as a whole with Middle East uprisings in these days which Kobanê resistance has been on the agenda. He said that Turkish government – who was expecting Kobanê to fall – opened corridor only owing to Kobanê resistance and worldwide mobilization supporting this resistance. He stated that masses which overthrew dictators in the Middle East need international solidarity.

Syrian writer and journalist Yassin al-Haj Saleh talked over what Syrians had gone through from the aspects of imprisonment, death, exile and hiding during the process ended up with the Syrian Revolution. He emphasized that the Assad regime was responsible of those. Saleh stated that Islamic movements also didn’t offer a different experience than Assad’s to Syrian people, remarking that Syria is “Palestinized.”

Syrian grassroots activist Razan Ghazzawi, who carries out activities in cities like Damascus and Idlib in particular, handled the revolution from the point of women. She emphasized that with the revolution, women – who were afraid of even going out before the revolution – actively participate in social life and take place in so-called “male-specific” works and places easily. Ghazzawi said women’s role in the revolution was much more than thought.

Mansour Atassi from the Committee of Syrian Communists stated that imperialist states made every effort to steal the uprising of the people. He mentioned that all countries were trying to get a part from the revolution, by giving the example of the USA which supported the Mubarak’s regime only until its failure was certain. Atassi underlined that USA and Russia are agreed not to meddle in the Assad regime, and countries in the region interfere in the process through various activities. He said that vulnerable point of the Syrian revolution is lack of an effective revolutionary political power in Syria, and the main beneficiaries of this situation are reactionary powers reinforced by the regime.

Hassan Mohammed Ali, Foreign Affairs Representative of PYD, participated in the panel via teleconference. He emphasized that ISIS started to fall after Kobanê and a pressure on the government was created with worldwide mobilities to withdraw supporting ISIS.

Senay Ozden from Hamisch – The Syrian Cultural House told social and legal position of Syrian refugees in Turkey in her speech. She pointed out racist attacks which particularly increased recently. Ozden remarked that attacks have been increasing day by day and the government is inviting racism by sending Syrians to camps after those attacks, closing the shops with Arabic statements, etc. She stated that in her studies in Gaziantep, “Turkish War of Independence” language was used in racist behaviours towards Syrians, emphasized widespread discourses such as “We protected this country, we won’t consign it to Syrians. We are ‘Gazi’antep*.” etc. and underlined that our own structural problems like housing, health, unemployment were laid on the others. According to Ozden, instead of regarding Syrians as guests to tolerate or approaching them with “conscience”, we should create solidarity channels from the bottom by realizing our mutual problems with them and remind the government its basic obligations.

Atakan Ciftci took the floor again for the closing speech. He said that uniting struggles in the Middle East is indispensable for the Kurds and Syrian rebels in Syria, and for Syrian refugees and Turkish workers in Turkey.

* T.N.: Historical name of the city was Antep. After Turkish War of Independence, it was changed as Gaziantep with the Kemalist regime. Gazi means war veteran.