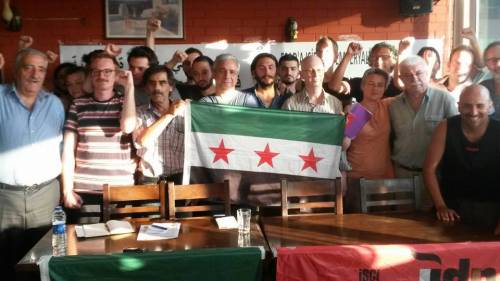 Istanbul Declaration: Break the siege on the Syrian revolution! With the people of Syria: down with Bashar, Daesh and the imperialist interventions!

In March 2011, in the midst of the revolutionary wave unfolding in the region, the masses of workers, youth and poor peasants of Syria invaded the streets against the dictatorship of Bashar al-Assad. Assad, in return, responded to these peaceful protests with fierce repression: use of live ammunition, arrests, torture, murder and the launch of explosive barrel bombs and chemical weapons against entire neighborhoods… After four years since the start of the revolution, the population of Syria has already paid a severe price for their fight for freedom: More than 300 thousand people have been killed, of whom %95 were murdered by the Assad forces. The numbers of the injured, arrested and missing are still unknown though it could be at least half a million in total. Moreover, the number of detainees is estimated to be more than 200 thousand, with the fate of most still yet to be discovered. Thousands of towns and villages have been destroyed and more than 11 million people have been forced to leave their homes, including over four million refugees who have sought safety outside the country.

The aforementioned atrocious figures show the suffering caused by this bloody regime, which uses all the deadly arsenal in its possession to repress its own people. Assad does this solely in order to remain in power. Moreover, it is important to remember that the same regime had imposed various neoliberal policies on the workers, youth and poor peasants, whose imposition was intensified under Bashar’s rule. The huge determination of the people’s struggle is nevertheless proven by the ongoing resistance against this state machine of class and sectarian hatred. This is also obvious from the continued existence of the local committees and councils, as well as the demonstrations in the liberated areas and the intense activity on social media. In respect to this resistance, we welcome the important and distinguished role that the women of Syria have been playing. They have been engaged in the revolution since its first days, and they will continue to play a key role in the political life for a free and democratic Syria.

However, the revolution does not only face the atrocities of the regime. It is also dealing with the reactionary forces such as Daesh, which emerged as an alien force in Syria with the aim of destroying the revolution via their criminal acts and their project of establishing an Islamic state. Daesh benefited from the funding and arms that came from Saudi Arabia and Qatar and were channeled through Turkey, which also opened its borders for the supply of fighters to Daesh. Armed confrontations between Daesh and the Assad regime have been rare, as Bashar manipulated the fundamentalists to serve as forces to crash the revolution: Assad emptied his prisons of the jihadists by setting them free and filled these prisons with workers, women, bloggers, journalists, leftist and human rights activists. Finally, the increasing impact of Daesh in the region is also due to their seizure of the arms that the United States had left there and the catastrophic results of US policies.

At present, the Syrian revolution is going through a very critical moment. In military terms, the regime is in retreat and it can only control a third of the country’s territory. Hence its existence depends upon the help from Iran and its militias that have gradually become a sort of occupying force with the heavy presence of Iranian generals in the Syrian armed forces. This fact will increase the fragmentation within the ruling elite over time.

As activists, intellectuals and internationalist organizations of the left from Syria, from the Arab countries as well as from Turkey, Europe, Latin America and North America, we support the social struggle and revolution of the people. As such, we declare that:

1. We support the heroic struggle of the Syrian people, which is unfortunately facing the killing machine of the regime in complete isolation. We denounce the silence and open complicity of the great majority of the international left that supports the regime and that is also responsible for the current isolation of the struggle. The silence and complicity of the left have only made the situation worse for those who have been fighting in Syria for freedom and social justice: This is a betrayal that history will not forget! We are for the struggle and popular resistance, in light of what our historical experiences have taught us: despite all the difficulties, the masses in Syria continue asking for dignity, work, bread and freedom! The Kurdish people participated in the Syrian Revolution since its beginning, as their rights have been oppressed like those of all other Syrians. Without doubt, the victory of the Syrian Revolution will allow them to achieve their democratic rights as well.

2. We condemn all intervention by any regional or international powers which are all hostile to the Syrian Revolution. They know that the victory of the revolution in Syria will give new hope to the people of the Middle East, Maghreb and beyond. Iran (together with Hezbollah) and Russia have kept offering military support to the Syrian regime, which has been vital for its survival. Turkey and the Gulf countries (especially Saudi Arabia and Qatar) supported the fundamentalist forces, hoping to turn the conflict into a sectarian civil war and to control the future of the country following the anticipated fall of the regime. The imperialist bombardments by the United States and Europe in Syria and in Iraq have reinforced a counter reaction from the regime and the jihadists. At the same time, these imperialist forces are trying to “launder” Bashar in the international arena as the region is “facing a jihadist threat.” Such laundering would serve the interests of Israel that has strong bonds with the regime, because it would ensure “the stability of the region” in addition to the security of its northern border. The connivance of the regime forces with Daesh in crushing the resistance of the Palestinian refugees in Yarmouk is the latest proof of objective cooperation between the Damascus regime and the Zionist state.

3. We condemn Daesh as well as all other fundamentalist forces such as Jayüsh al Islam or Al-Nusra that are all trying to impose their reactionary and extremely violent power onto the people’s dreams of freedom. These forces arrest, kidnap, torture and kill simple activists, let alone the leaders of the revolutionary movement.

4. We want to stress that there cannot be any political solution that presupposes the existence of the current regime in Syria, simply because such existence would not allow the masses, which have been mobilized to bring about a free and democratic Syria based on social justice, to reach their objective. So we state firmly that the fate of their struggle should be left to the will of these masses.

5. We denounce the political policies of the “fortress of Europe” that condemn the refugees, including numerous Syrians fleeing the massacre to death. These people have no other choice than risking their lives in the Mediterranean, which has been turned into the largest mass grave of the world. The only choice that the “damned of the sea” face is to either get drowned at the sea or to become the new slaves of the XXIst century in a European continent in deep crisis.

6. We are aware that the struggle in Syria is the expression of a fundamental demand for freedom and social justice on a regional and an international level. It is part of an international revolutionary wave triggered by the deep capitalist crisis of 2008, which unleashed renewed attacks by the imperialists and the bourgeois class against the interests of the workers, the youth and the poor people. Thus, the struggle against the consequences of the capitalist crisis cannot be separated from the struggle against regional dictatorships. The fate of the Syrian revolution is organically linked to the popular struggles in Iraq, Bahrain, Egypt, Tunisia, Libya, Yemen and to those in other countries, where the youth, workers and peasants are in revolt against widespread oppression and misery.

The Syrian revolution is also inseparable from the struggle of the Palestinians who have been fighting against occupation since 1948. Beyond the region, this revolution has its echoes in different movements fighting against neoliberalism in Latin America and Europe, as we have seen in the strong “No” of the workers and youth against the austerity measures and the dictatorship of debt in Greece.

7. Finally, we support the local committees, revolutionary councils and humanitarian groups working in the field as well as the independent brigades of the Free Syrian Army fighting against the regime and the fundamentalist groups. Furthermore, we support the true left in Syria for it to become stronger and to make it protect and deepen the revolution so that the original goals and objectives are achieved.

If the Syrian revolution were to be defeated, it would be a dangerous precedent for all the struggles around the world and it would trigger a significant retreat of the international revolutionary wave. On the contrary, if the Syrian revolution is successful, its victory will serve as a new path in the region as well as in the entire world, and it will strengthen the struggle of the workers and the popular masses world-wide.

In the immediate future we are all committing to:

1. Confirm our support and organize activities in order to portray the real picture of the revolution, to strengthen its effectiveness and to provide all means that are necessary to bring about its victory.

2. Publish this statement via all possible channels.

3. Launch a campaign with the slogan, “Break the Siege on the Syrian Revolution!” That includes,

– The organization of the commemoration for the second anniversary of the Goutha Massacre that occurred on August 21, 2013, through public activities in the countries where we are actively present.

– The organization of a week of popular international solidarity with the Syrian revolution between 5th and 11th of October 2015.

4. Elect a Coordination Committee that will coordinate the aforementioned campaigns and help organise further actions and activities.

Yasser Munif, Syrian activist- Co-founder of the Global Campaign of Solidarity with the Syrian Revolution