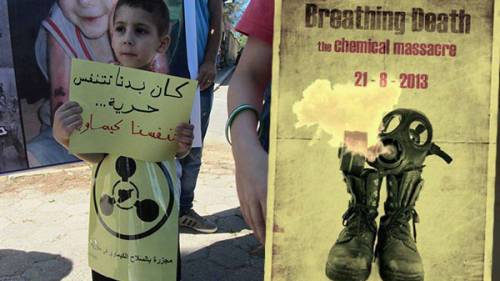 21st of August. Two years after the chemical attack massacre in Goutha, Syria

Break the siege on the Syrian revolution! With the people of Syria: Down with Bashar, Daesh and the imperialist interventions!

August 21 marks the second anniversary of the chemical slaughter which took place in Ghouta, on the outskirts of Damascus. The chemical attack of Bashar al Assad’s regime killed in a matter of minutes, more than a thousand people, most of whom were women and children who were sleeping peacefully in East and West Ghouta. Like other massacres, this chemical slaughter has happened and the culprit remains unpunished.

Various organizations of the Syrian and global left, which met in Istanbul in July, we call to conduct a unified day of action around the world to again repudiate that slaughter and in support of the Syrian people’s resistance.

“In March 2011, in the midst of the revolutionary wave unfolding in the region, the masses of workers, youth and poor peasants of Syria invaded the streets against the dictatorship of Bashar al-Assad. Assad, in return, responded to these peaceful protests with fierce repression: use of live ammunition, arrests, torture, murder and the launch of explosive barrel bombs and chemical weapons against entire neighbourhoods. After four years since the start of the revolution, the population of Syria has already paid a severe price for their fight for freedom: More than 300 thousand people have been killed, of whom 95 percent were murdered by the Assad forces. The numbers of the injured, arrested and missing are still unknown though it could be at least half a million in total.” (…)

“We are aware that the struggle in Syria is the expression of a fundamental demand for freedom and social justice on a regional and an international level. It is part of an international revolutionary wave triggered by the deep capitalist crisis of 2008, which unleashed renewed attacks by the imperialists and the bourgeois class against the interests of the workers, the youth and the poor people. Thus, the struggle against the consequences of the capitalist crisis cannot be separated from the struggle against regional dictatorships. The fate of the Syrian revolution is organically linked to the popular struggles in Iraq, Bahrain, Egypt, Tunisia, Libya, Yemen and to those in other countries, where the youth, workers and peasants are in revolt against widespread oppression and misery.”

“The Syrian revolution is also inseparable from the struggle of the Palestinians who have been fighting against occupation since 1948. Beyond the region, this revolution has its echoes in different movements fighting against neoliberalism in Latin America and Europe, as we have seen in the strong “No” of the workers and youth against the austerity measures and the dictatorship of debt in Greece.”

“We support the local committees, revolutionary councils and humanitarian groups working in the field as well as the independent brigades of the Free Syrian Army fighting against the regime and the fundamentalist groups. Furthermore, we support the true left in Syria for it to become stronger and to make it protect and deepen the revolution so that the original goals and objectives are achieved.” (Statement of the Istanbul Meeting)

Therefore, we call to the political, trade union, democratic, anti-imperialist and world left organizations to carry out united actions on 21 August, in the main cities of the world. On the second anniversary of the massacre of Goutha, in repudiation to the crimes of the regime and in support of the Syrian people against the dictatorship of al-Assad, against the reactionary ISIS (Daesh in Arabic) and any form of imperialist intervention.
International Workers Unity–Fourth International (IWU–FI), part of the Coordination Committee of the International Campaign
9 August 2015