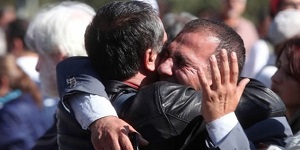 700 dead from June 7 to November 1! November 1: Victory of fear and hopelessness!

November 1 “victory” of AKP was built on lies, death and tears. Mechanisms of threatening, oppression, intimidation and leaving helpless were used. Suggesting that November 1 election was under equal and fair terms is like beating someone hands tied and saying “we fought one-on-one”. It is not possible to accept this impudent and indecent sense of justice and equality as “democracy”. The mentality which didn’t consider June 7 as “national will” and repeated the election now expects everybody to accept November 1. This is the reflection of antidemocratic picture, not the democracy. Everybody knows that the elections would continue to “repeat” somehow until AKP came to power alone, or “other” mechanisms would step in. For this very reason, RTE (Recep Tayyip Erdoğan, the president of the republic) will try to make presidential system absolutely sovereign in order not to face results similar to June 7 in the future. What happened from June 7 to November 1 should be read as a summary of what will happen until the presidential system is established.

People don’t make decisions without influence. The direct and determining relation between the election results and the statements of “White Toros”, threats like “We will go back to 90s, or even to 70s” and bomb blasts is obvious. During the period of June 7-November 1, hundreds of people lost their lives, tens of children died. After Suruç, people were killed in the heart of the capital as well, and their shattered bodies could be identified via only DNA tests. Within this frame not hope, but despair steered the decisions of people in the election. November 1 is the victory of fear and hopelessness.

Nevertheless, some people may still want to believe that 49% was reached with a “Prime Minister” who explains the difference from ISIS as 360-degree and presents the shattered suicide bomber as “arrested suspects”. Or some people may think that promises like “tenure to subcontracted workers, increase in the minimum wage, addition of 100 liras to the pensioners” as if AKP didn’t turn subcontract into dominant way of working and didn’t deplete the retirement pensions and the workers’ salaries. Or some may try to explain the election results in terms of “stability” which doesn’t and won’t exist. All of these opinions are aimed at covering and eliminating true reasons.

For example, stability! Growth rates in so-called economically miraculous AKP era and continuously condemned 1980-1990 period with many coalitions are almost the same. Rates in 1962-1979 period are even higher than “golden” years with AKP. Over-estimated growth period with AKP which did not provide employment in any way also created the biggest table of debt and current account deficit of the history of the republic. Having come to power in 2002 with the promise of eliminating corruption, poverty and prohibitions, AKP has peaked up in these in 13 years. Soma shows AKP’s attitude to workers and labourers. What happened to Berkin Elvan explains ideological-political world of AKP. Dead body of Cemile that was kept in the freezer for 3 days expresses AKP’s understanding of the resolution of the Kurdish conflict. The issues from June 7 to November 1 put forward that AKP is a great disaster that happened to this country.

So what does 49% mean? Marx says “It is not the consciousness of men that determines their existence but their social existence that determines their consciousness,” and remarks that it is necessary to focus on the contradictions of material life, the conflict between social forces of production and production relations. 1980 military coup and 35-year neoliberal counterrevolution enabled by these means, the historical-social composition of “low-intensity war” processes with the Kurds since 30 years, global financial crisis in 2008 and the process of Arab revolutions boomed in 2011 give us the key of understanding the results of November 1 in this respect. The events from June 7 to November 1 happened on this historical-social-political ground and yielded a result for AKP. But remember that this ground also created and could create Gezi, Kobane, metal sector strikes and the results of June 7 election. Therefore, we would be mistaken if we consider election results as an ultimate summary of the situation of class struggle. As Marx said, “… humanity sets itself only such tasks as it is able to solve. Since closer examination will always show that the problem itself arises only when the material conditions for its solution are already present or at least in the course of formation”. Material conditions are suitable, but they won’t change if you don’t change. And yes, strugglers are the ones to always have the last word.