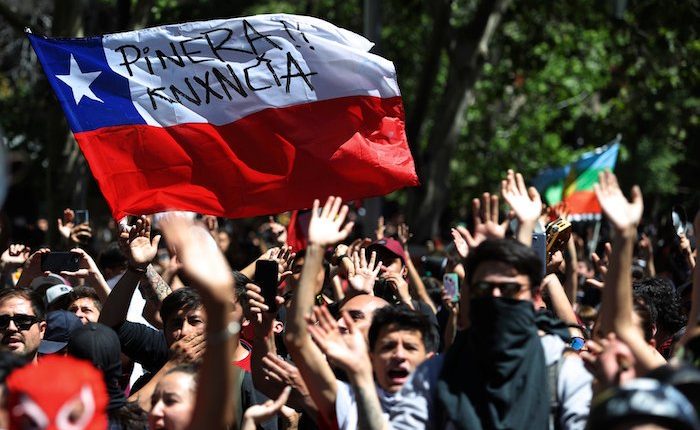 All support to the Chilean people!

Thousands of young people, workers and popular sectors took to the streets in Santiago and in all the cities of the country to repudiate the actions of President Piñera and the military.

While the barricades in Ecuador, where the indigenous people, the students and the working people had defeated the rise in fuel decreed by the bosses’ government and the IMF, had not been extinguished yet, in Chile thousands went out to question the rise in Metro tariffs.

Faced with the massive protest, Piñera’s government backed down, cancelling the subway increase. But the people continued in the streets repudiating the repression and all the policy of surrender and reduction of the standard of living carried out by Piñera’s government.

Why is this uprising taking place? Days before, Piñera said Chile was an “oasis” in Latin America as opposed to what was happening in Ecuador. Imperialism and the multinationals used Chile’s “order” as an example. Chile’s true face is something else for the impoverished Chilean people. The rise in the subway was only the trigger of the anger accumulated during years of austerity policies this government and the previous ones of the “Concertación” (Concertation) and the faked Bachelet’s Socialism applied.

Piñera did nothing but deepen the austerity to continue benefitting the big businessmen. An austerity that materialised in the sustained raise in the cost of living that this government has promoted, such as the price of transportation and basic services such as water, electricity and food. The support of privatisations. The attack on health and public education.

The working people and youth of Chile said: Enough!

Piñera’s reactionary government declared a state of emergency that sought to silence the demonstrations and claims. It even imposed a curfew. Since it was not enough with the Chilean police (the hated “pacos”), he took the military out into the streets. He spoke of declaring a “war” against the “criminals”. The response of the Chilean people and youth did not last long. Thousands took to the streets, ignoring the state of emergency. They banged pots and pans and organised hundreds of assemblies in the neighbourhoods of Santiago on Sunday. On Monday, thousands mobilised again in defiance of the military and Piñera’s state of emergency. And the working class went along. There was a miners’ strike, as did the port workers of Antofagasta and the truck drivers protested for the tolls. On Tuesday, the health workers joined in. In Chile, there is a state of a general strike.

The overflow of the mass movement took Piñera and his pro-imperialist capitalist government by surprise as they swarmed the streets with no direction. The same happened with the trade union centres and the employers’ opposition and reformist parties. And now they call for a “dialogue” (Bachelet, the Communist Party and the Broad Front) and stop the struggle. The people shout in the streets, “Down With the rising cost of living! Let Piñera and the military leave!”

The Socialist Workers’ Movement (MST), Chilean section of the IWU-FI, is a part, from the start, of this popular, youthful and hardworking rebellion for their rights and against Piñera’s government. As revolutionary socialists we are in the street raising those same slogans, that the economic model of hunger and surrender has to end, not to pay the foreign debt, repression must end: it has already led to 10 deaths and hundreds of wounded, outside the police and the military, freedom for those arrested, Piñera must leave, the curfew and the state of emergency must stop. The MST raises the need to unite the struggle in a general strike. Chile needs a fundamental change: the workers and the people will once and for all lead the country.

The mobilisations in Ecuador and Chile show the people can defeat the IMF and the governments and their austerity plans. These examples impress Latin America and the world. There are struggles and protests everywhere in the region. We have to unite the workers, youth and popular struggle against the IMF, the multinationals and the austerity governments. It is necessary to raise a front of debtor countries so as not to pay the fraudulent foreign debt and break with the IMF. Ecuador and Chile show us the way. Now it is necessary to support the struggle of the Chilean people and youth to succeed over Piñera’s government and its criminal repression.

From the IWU-FI we join all the unitary mobilisations to support the Chilean people and we call to carry out new actions.