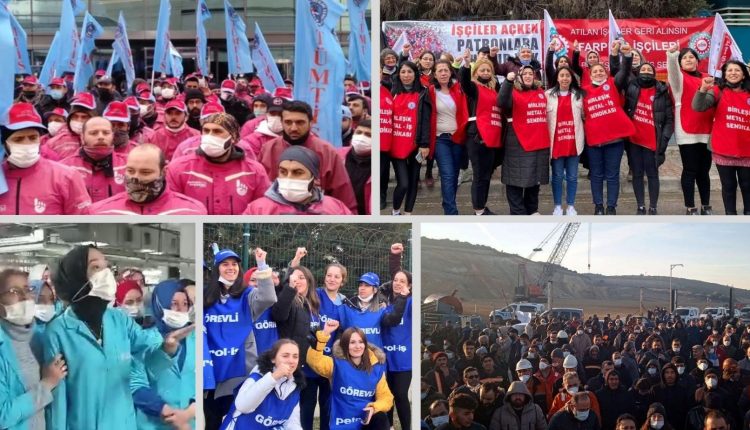 Erdogan has kept saying that “we will enter a period in which each new month is better than the previous one” every time he made a statement regarding the state of our economy in recent times. The real owner of these words repeated like a broken record for the past 2 years, was Minister Berat Albayrak, known as the groom minister (since he is Erdogan’s son-in-law). After insisting that “every next month will be better than the previous one,” Albayrak once added, “May God help us” and disappeared from the face of earth (after he resigned as treasury and finance minister in November 2020, he abruptly disappeared from public life). While this kind of “desperate optimism” prevails for Erdogan and his immediate circle, the economic destruction we have been experiencing is getting “deeper each month than it was during the previous one” for us, the workers.

Although the Erdogan administration tries to indicate the “external forces” as the cause of the economic destruction while offering economic promises like he was an opposition leader, it is becoming the common view of the working people that the 20-year-long AKP rule is the responsible for the deep misery we are now living in, and that the hatred towards the Erdogan regime is spreading. While Erdogan is trying to boast about the 11 percent economic growth, the cost of living, the misery wages, the growing unemployment, and the unpaid bills are the main concern of large segments of society because of his government’s anti-worker policies.

The economic policies of the Erdogan regime have also made the country’s economy one of the most fragile economies in the world. The fact that Turkey is the third most affected country, after Russia and Ukraine, by Russia’s invasion of Ukraine is a clear example of this situation. With the onset of the invasion, TL became the currency that lost the most value after the Russian ruble. The $128 billion Central Bank reserves had been spent during the groom minister’s term in the name of the “low interest” policy. In line with this same bankrupt policy and to offset its consequences, billions of more dollars from the reserves are being spent again nowadays to protect the value of the TL, albeit temporarily. Moreover, the cost of the recently implemented “exchange rate-protected deposit account” system to the Treasury has already reached 23 billion TL (23 quadrillion in old currency).

The bankrupt economic policies are not only reflected in our lives as a deep misery; they also cause the country to become more dependent and fragile in the face of imperialism and the regional powers. The Erdogan administration, which has nominally challenged the administration of Israel and of the United Arab Emirates (UAE) for years, is now on its knees before these two countries in the name of receiving some economic aid. After rolling out the red (in reality, turquoise) carpet for the UAE prince, Mohammed bin Zayed, whom the Erdogan regime once accused of being the perpetrator of the July 15 coup d’état attempt, Erdoğan personally visited the UAE and signed agreements whose content remained uncertain and opaque. Similarly, Israeli President Herzog was invited to Turkey. The clearest indication of bankruptcy in foreign policy came to light with Russia’s invasion of Ukraine. The Erdogan administration, which pursued an adventurous, expansionist and dangerous foreign policy for years, has become reluctant to even call the invasion of Russia an invasion due to its deep dependence on both Russia and Western powers at once. Defining Russia’s aggression and occupation of Ukraine as a “crisis,” Erdogan could not go beyond making mediation offers that nobody really cared about.

While these developments were taking place, the National Alliance, along with the parties in its current circle, announced their joint program regarding the “reinforced parliamentary system.” This program, which does not mention the words such as “worker,” “union,” “Istanbul Convention,” or “Kurdish people” even once, demonstrates that the “Alliance of 6” will keep preaching to the masses who are abandoned to deep misery and oppression to patiently wait for the elections. In the face of this, thousands of workers from dozens of workplaces have become the pioneers of a new wave of struggle against piecemeal wage increases, layoffs, and anti-union attitudes. Villagers have been standing up against environmental destruction; women are taking the streets against femicides and double exploitation… All these movements show that the exit from Erdogan’s one-man regime can only happen with the mobilization of the masses, and not by waiting for the elections. The main task of the socialists and labor organizations continues to be the construction of a labor alliance that can make the exit from this order of oppression and exploitation permanent.