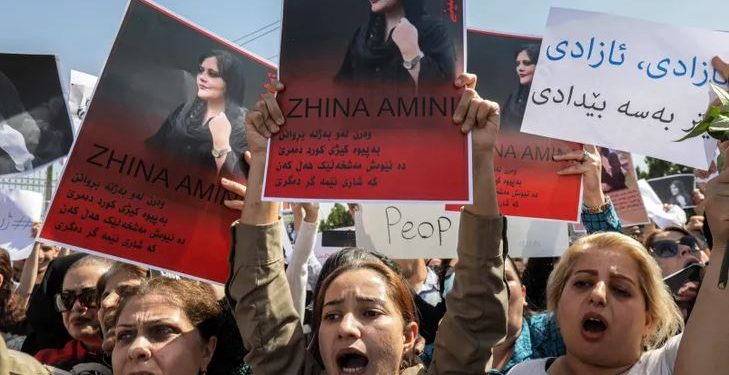 Solidarity with the revolt of Iranian women and working people against the dictatorship regime!

In Tehran, Iran, after 22-year-old Mahsa Amini was detained and beaten by the “morality police” for not wearing her headscarf properly and lost her life on 16 September as a result of the police violence, a wave of anger has spread throughout the whole country within 6 days.

The wave of protests that started with women removing their headscarves and cutting their hair has spread throughout the country, especially in Eastern Kurdistan and Western Azerbaijan. Protests organized by students at universities were accompanied by shopkeepers taking down the shutters and then workers went on strike in some sectors such as oil and glass. Cities such as Keraj, Tabriz, Mashhad, Kish, Kerman, Yazd, Rasht, Kermanshah, Ardabil, Isfahan, Urmia, Qazvin, Zanjan, Ilam, Hamadan, Mahabad, and the capital Tehran are the main centers of protests.

The mass anger of the working people of Iran, especially women, against the dictatorial regime’s violent suppression of the protests has taken on a popular and anti-mullah regime character. With the slogans “We are all Mahsa, we will fight to the end!”, “Women, life, freedom!”, “Death to the dictator!”, “We don’t want the Islamic Republic!” and the demands against Islamist and patriarchal institutions of the regime “Abolish the morality police, close Ministry of Culture and Islamic Guidance!”, “Get rid of the Besij!”, “Abolish Velayat-e Faqih!” (The highest legislative body of the Iranian regime consisting of 14-15 mullahs), the Iranian people burnt posters of Khomeini and Khamenei, the figures of the repressive Ayatollah regime, and occupied municipal buildings in some regions.

As a result of intense police violence (using rubber and real bullets) to suppress the mass mobilization, while at least 7 people lost their lives, the number of injured and detainees is said to be hundreds of people. On the other hand, the dictatorial regime is trying to block internet access and communication applications such as WhatsApp and Instagram in order to prevent working people from communicating.

We, International Workers’ Unity – Fourth International, stand with the women and working people of Iran as they revolt against the repressive, dictatorial and Islamist regime that has been in power for 43 years. The ongoing demonstrations in the country today are a continuation of the mobilizations against capitalist exploitation policies in 2017, the wave of strikes in 2019, and “White Wednesday” protests organized by Iranian women against the compulsory headscarf law. The demands of the Iranian working class against capitalist exploitation, of women and LGBTI+ people against oppression and for gender equality, and of the Kurdish people for self-determination are today united in a wave of anger against the dictatorial regime.

The struggle of women and working people against the Iranian regime, which is one of the most important forces of the counter-revolution in the region, is of critical importance for the peoples of the entire region.

On an international scale, the ongoing mobilization of women and working people of Iran stands on the same ground with many peoples struggling against the deepening world crisis and its consequences on the decline in the standard of living of the masses.

The decisive point in this struggle of the Iranian working class, women and LGBTI+ people, and Kurdish people, whose demands against the dictatorial regime are common, is that during the mobilizations, the masses will be able to build their own self-organization and determine their own will in the way of breaking away from the regime and capitalism within the framework of an action program. Iranian socialists, independent class organizations, women’s organizations, and organizations in Eastern Kurdistan have an important responsibility in this sense.

In line with this perspective, International Workers’ Unity – Fourth International expresses its unconditional solidarity with the struggle of women and the working people of Iran.

On an international scale, we call on all organizations that claim to be democratic, on the left, trade unions, women’s and LGBTI+ organizations to stand in solidarity with the demands and struggle of the Iranian working people and women against the oppression, misogynist policies and increasing state and police violence of the dictatorial regime and to organize common actions, especially in front of Iranian consulates!

Down with the capitalist, dictatorial Iranian regime!

Stop the violence and criminalization of mobilizations!

The people want the fall of the regime!