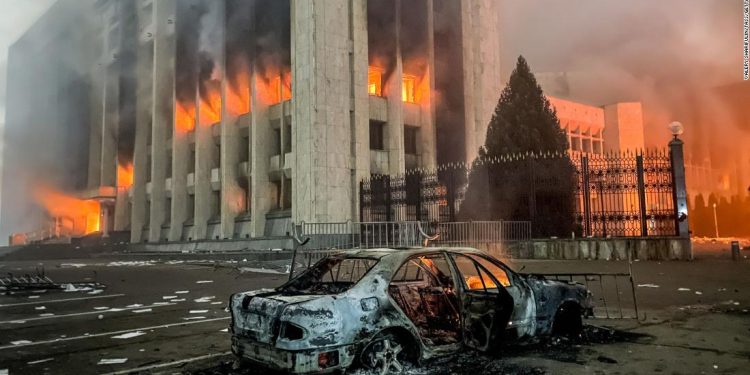 Down with the Nazarbayev-Tokayev regime! Imperialism out of Kazakhstan!

With the 50 percent increase in gas prices by the government on 2 January 2022, a massive revolt broke out in Kazakhstan, accompanied by strikes in many factories in the energy sector. As a result of the rebellion that began in Zhanazoen, an oil city, on 4 January, the price hike in the Mangistav region was withdrawn. Seeing they could win by fighting, the revolt of Kazakhstan’s workers quickly spread to Almaty, the country’s largest city, and many other cities.

The wave of rebellion, triggered by the gas hike, spread with economic demands in the face of rising inflation, the depreciation of the country’s local currency, the Tenge, increases in basic consumer goods and, the melting of workers’ purchasing power. It took on a national character and turned into a revolutionary mobilisation as a result of the oppressive and corrupt regime bringing the law enforcers and repression of the masses onto the streets. They embodied political demands.

Nursultan Nazarbayev remained in power for 32 years until he stepped down as President in 2019. The country gained its independence with the dissolution of the Soviet Union in 1991, from the remnants of the old Stalinist bureaucracy. He was a dictatorial oppressor and dictator who had many powers over the control and exploitation of the country’s immense natural resources. He had built an oligarchic regime. Although the mass mobilisations that unfolded in 2019 allowed Nazarbayev to hand over the government to former prime minister Tokayev (current president), he had significant power in the background as the “leader of the nation” and the chairman of the Security Council.

For these reasons, the working class and popular sectors shouted “Nazarbayev ket, Şal ket!” and mobilised with this slogan (Get out, old man, get out of Nazarbayev!). They raised the demand for elections to replace the governors who came to power by appointment and demanded a new constitution to break with the oppressive regime.

As a result of the masses’ revolutionary mobilisation, economic and political demands were raised, and on 5 January the price hikes in the country were withdrawn and the government known as the Mamin Cabinet resigned. After the resignation of Prime Minister Askar Mamin and his deputy Alihan Smailov, an interim government headed by Tokayev was appointed. He applied state control of fuel and food prices for 6 months.

Although the spontaneously mobilised working masses achieved these important gains, the struggles took on an even more anti-regime character instead of retreating. Government buildings were set on fire in many regions, activists seized the presidential residence in Almaty and the masses tore down statues of Nazarbayev. In the face of the regime’s violence against the working people, the army and police forces were divided and sections supporting the mobilisations came to the fore.

In the face of the growing anger of Kazakhstan’s workers, Tokayev declared that Nazarbayev was removed from the presidency of the Security Council and assumed this position, and stated the mobilisations were a “terrorist threat”. The regime, which declared a two-week state of emergency throughout the country and was responsible for the murder of dozens of workers, also invited the Collective Security Treaty Organisation, a military alliance established by the countries of the Commonwealth of Independent States, and Russia to intervene in Kazakhstan.

Solidarity with the revolutionary mobilisation of the working people of Kazakhstan!

As the International Workers’ Unity-Fourth International, we salute the revolutionary mobilisation of the working class and people of Kazakhstan!

The process in the country is the spontaneous revolutionary mobilisation of the workers and masses of Kazakhstan around the economic and democratic demands against an oligarchic and dictatorial regime based on the capitalist exploitation of the rich energy resources of the country through cooperation with Russia, China, and imperialism.

This uprising is a continuation of the waves of strikes and mass mobilisations that took place in Kazakhstan in 2011 and between 2018-2020 in the aftermath of the global economic crisis of capitalism that began in 2008.

On an international scale, it is an integral part of the struggles taking place on the world stage against the economic crisis that has deepened with the pandemic and the austerity policies implemented by the governments for a pro-capitalist way out of the crisis.

In order to strangle the mass mobilisations and keep the regime alive, the Kazakh bourgeoisie invited imperialism and the expansionist countries of the region to intervene. Against this, the most basic task of the peoples of the world and the internationalists is to build the broadest solidarity with the working people of Kazakhstan against the oppressive regime and imperialist intervention.

In Kazakhstan, the ability of the masses to achieve their democratic, economic and social demands and secure their gains depends on the creation of a working class-based alternative of power, which alone can make it possible to break with the present regime, the capitalist system of exploitation and imperialism, in the perspective of a workers’ and people’s government.

In the struggle for the break with the oppressive regime and for a new constitution of the workers, for a free and sovereign constituent assembly.

The way for all this is the national expansion and the coordination of the local bodies formed by the working people, especially in the western part of the country, during the mobilisations. And also to keep mobilisation around a plan of action in support of the democratic, economic and social demands of the masses in struggle.

As the International Workers’ Unity – Fourth International, we invite trade unions, student and left organisations of the world to weave international solidarity in support of the revolutionary mobilisation of the working class and the people of Kazakhstan.

Down with the Nazarbayev-Tokayev regime!

The state of emergency must be lifted immediately!

Army withdraw from the streets! Stop criminalising the mobilisations!

Those politically responsible who ordered the massacre of the people must be arrested and prosecuted immediately!

All obstacles to organisation, trade union formation and, democratic rights must be removed immediately!

To fight for the self-organisation of the masses!

Workers will not be the guinea pigs of the Erdogan government!